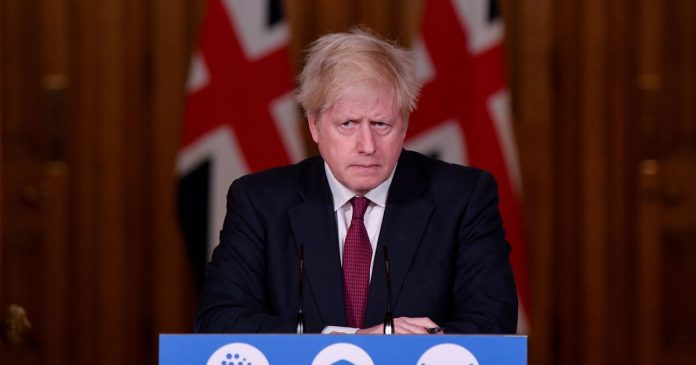 Millions of people in London and South East England have to stay home for Christmas. The government has tightened restrictions significantly – the reason being the mutation of coronovirus.

Due to the rapid spread of a new version of the Corona virus in Great Britain, the government has implemented a new shutdown for the capital London. Prime Minister Boris Johnson told reporters in London on Saturday that the recently discovered version is 70 percent more contagious than previously known. There is no evidence that vaccines are less effective against mutations.

“There is still a lot we don’t know. But there is no evidence that the new version causes a more or more severe disease course, ”Johnson said. The high mortality rate from the virus variant VUI2020 / 12/01 has not yet been determined. Patrick Valens, an advisor to the top scientific government, insisted that 60 percent of new infections in London in December affected the new version. “It is spreading rapidly and becoming the dominant diversity,” he said.

Due to the proliferation, the government tightened Corona restrictions in London, for example: Christmas parties with families and friends have now been canceled for millions. Johnson said, “If the virus changes its way of attack, then we have to change our way of defense.” “Without these measures, signs indicate, the number of infections will skyrocket, hospitals will be overwhelmed and thousands of people will lose their lives.”

Instead of three Corona warning levels, there will be four in the future – the highest will include other areas in the south-east besides the capital. There, residents are only allowed to leave their homes for important reasons, such as going to the doctor or going to work. Even at Christmas you should not meet members of other families, emphasized Johnson. “We are giving our loved ones the opportunity to see this Christmas so that we have a better chance of saving their lives so that we can see them on Christmas in the future.”

All non-essential businesses and other facilities such as fitness studios, hairdressers, cinema and beauty salons have to be closed. Residents of the highest corona level 4 are not allowed to leave this area. Until now, from December 23 to 27, up to three houses were allowed to come together to form “Christmas bubbles”. It is now limited to Christmas Day outside Zone 4.

Sanctions have also been tightened in other parts of the country, which can decide on the Corona measures themselves. A shutdown should also apply in Wales from this Sunday – in line with the fourth phase in England. Scotland has banned travel to other parts of the UK.

The trade union BRC warned of dire consequences for the economy. “For companies, anything but the front and back of the government is helpful,” said Helen Dickinson, head of the association. The decision is made before Christmas in the midst of the most important phase of retail.

About 27,000 new corona cases were counted in Great Britain on Saturday, so the country has had more than two million infections so far. To date, approximately 83,000 people have died of lung disease Kovid-19. The government introduced good vaccination ten days ago. As Johnson said, so far, around 350,000 people across the country have received funding from Mens-based pharmaceutical company Beotech and its US partner Pfizer.