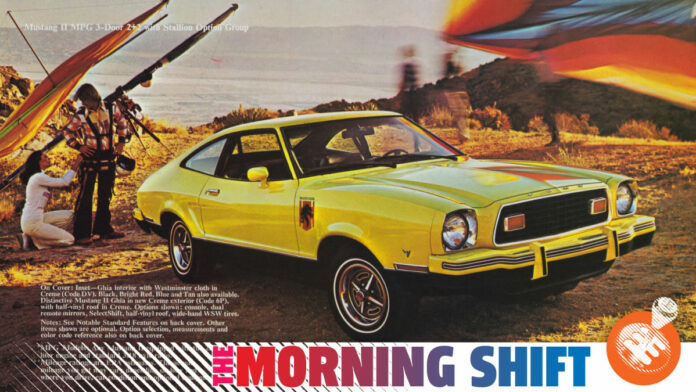 The Morning ShiftAll your daily car news in one convenient place. Isn’t your time more important?

California just locked in auto emissions standards that defy the Trump administration. The entire plan seems to be “just don’t do what Trump says” and it seems to be working. All that and more in The Morning Shift for Tuesday, August 18, 2020.

1st Gear: Shout Out To CARB

The Trump administration really tried with this one, but it seems that its efforts have been rebuffed, as Reuters reports, giving a brief timeline of how this all went down

A month later, the Justice Department opened an antitrust probe into the agreements. The government ended the investigation without action.

The 50-page California agreements, which extend through 2026, are less onerous than the standards finalized by the Obama administration but tougher than the Trump administration standards. The automakers have also agreed to electric vehicle commitments.﻿

Some weak shit: GM, Fiat-Chrysler, and Toyota are not with it. Reuters continues with the lay of the land:

Other major automakers like General Motors, Fiat Chrysler Automobiles and Toyota Motor Corp. did not join the California agreement.

Those companies also sided with the Trump administration in a separate lawsuit over whether the federal government can strip California of the right to set zero emission vehicle requirements.

Sure is weird that Toyota has been a leader in selling “clean” hybrids here in America and GM is pushing hard on EVs and yet they don’t back CARB. Seems dumb to me!

To be honest, I have no great way of understanding what is happening with this new story about GM stocks surging amid speculation about its EV business. Bloomberg lays it all out in a not-yet-online wire report:

General Motors Co. shares rose to their highest level in almost three months after a Deutsche Bank analyst speculated the automaker could spin off its electric-vehicle unit to create more value.

The stock pared a gain of as much as 10.5% in Monday trading before closing up 7.7% at $30.01 a share — the biggest one-day jump since May 18 and its highest close since June 8. That came after Deutsche Bank’s Emmanuel Rosner wrote in a report published Monday the automaker could be worth as much as $93 a share if GM spins out its electric-vehicle business. GM has pondered such a move recently, Bloomberg reported earlier this month, reviving an idea first mulled internally two years ago. A spokesman declined to comment beyond referring to the remarks its chief executive officer, Mary Barra, made last month.﻿

What confuses me is this part, the real juice:

Despite the share gains Monday, the Detroit-based automaker’s stock is down 18% so far this year while all- electric rival Tesla Inc.’s value is eight times that of GM. By spinning off its EV business, GM could get the kind of momentum enjoyed by Tesla and a handful of startups that have lured capital despite their having no vehicles on the market.﻿

This is all to say that I have zero ideas where all of this speculation is coming from, but stocks and speculation are not my forte.

This report from the Financial Times is blowing my mind:

Japanese government figures tried to bring Nissan and Honda together for merger talks this year, in a sign of growing concern in Tokyo over the future of the country’s once mighty car sector.

The idea of combining Nissan with Honda appears to have arisen from the protectionist instincts of advisers to prime minister Shinzo Abe. Those advisers, said people familiar with the situation, feared that the state of Nissan’s alliance with Renault had soured so badly since the arrest in 2018 of their former boss Carlos Ghosn, that it might at some point collapse altogether, and leave the Japanese company exposed.

But Honda officials have pushed back against that idea, pointing to Nissan’s complex capital structure with Renault, one person who was close to the talks said. Nissan was equally opposed to the idea as the group focuses on getting its existing alliance back on track, another person close to the company’s board said. The merger idea quickly evaporated before it reached the boards of both companies. ﻿

So… the Japanese government so opposed to the idea of Renault and Nissan forming into one more coherent whole meanwhile sought to combo Nissan and Honda. I mean, I know the justification for one being “bad” and the other being “good” but I am still amazed.

Geely has been getting some good press lately for talking the big talk about entering the top tier of automakers. Even Donut Media took some time out of its schedule to hype it up! Behind these news stories, however, profits “plunge” as the Financial Times puts it:

Geely Auto profits sank by 43 per cent in the first half as the pandemic pushed the ambitious Chinese carmaker to slash its sales target for the year.

John Zeng, a Shanghai-based analyst at consultancy LMC Automotive, noted that the 19 per cent drop was still marginally above the market average, adding that the group’s outlook for the second half of 2020 was good, given new product launches.

A planned merger between Geely Auto and Volvo Cars was put on hold in June while the Chinese brand sought a second listing in the mainland Chinese market.

The postponement might also be informed by Volvo’s weak sales during the pandemic and the worsening trade relationship between China and the US, which made it harder to export China-made cars abroad, according to Mr Zeng of LMC Automotive. “It’s not the best time for Geely to merge with Volvo,” he said. ﻿

I don’t know why but I still feel a bit like rooting for Geely, if only for the hope that it will start selling a bunch of affordable EVs in America. Also, the new Polestars look good.

This is an “on this day” from yesterday, but since we didn’t mention it yesterday, I don’t mind calling it back up. And I mainly don’t mind because even though this story is over 100 years old, it feels like it could be written today:

What do you think Trump is going to do next with relation to CARB? Just complain about it and do nothing? Actually try to hound CARB legally again? I’m not sure what his play is gonna be.