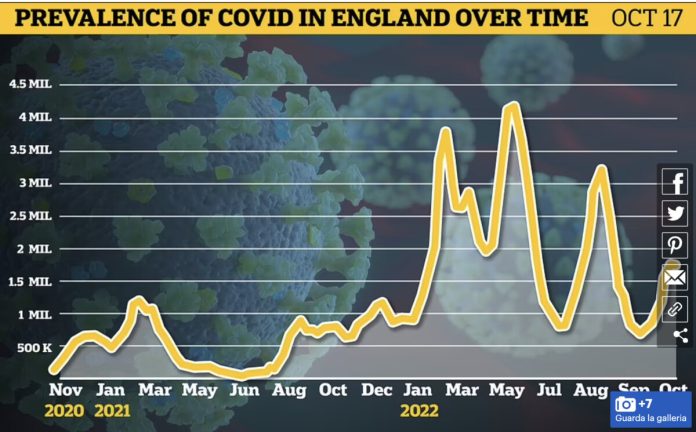 The UK Health Protection Agency (UKHSA), tasked with combating viral threats, has considered bq.1 and xbb to be “different designations” due to the rapid development in recent weeks. Experts fear that their list of mutations could allow them to better dodge the protection they have gained from past infections and vaccines and now create new waves of pandemics.

Lab tests of positive COVID swabs have detected 735 cases of the variant in the UK so far. Neither has yet been considered a “worrying look”, but the UKHSA has expressed concern that the strains could “promote future waves” of infection. He urged people to ensure that they are up to date with their COVID vaccines, which will still help protect people.

But this is only a small fraction of the actual cases due to the lack of testing. The agency fears the tension could “wind the waves of the future”. The infection rate has been rising since mid-September and is near a three-month high, with experts blaming new options, children returning to school and Britons returning from summer vacations. Some are demanding return of masks. Health officials have warned of the risk of coronavirus and flu twindemic in the winter, when the peak of infection will occur simultaneously, one after the other, which will significantly increase the burden on the health care system.

It comes as data from the Office for National Statistics (ONS) confirmed that just six weeks after the most recent wave, Covid infections in England are stabilizing. It is believed that one in 30 people are still infected, with an increase of 2.5% in a week.

See also  Overshoot Day. Italy has already exhausted the resources it can ask of the Earth

Virus levels have been rising since mid-September and are now hitting a three-month high, with experts blaming new variants, back-to-school effects and Britons returning from summer holidays. Some had demanded to return the masks.

ONS statisticians said the latest wave of Covid remains “a mixed picture” and added that “it is too early to tell from the data whether we are seeing a significant point in infection levels.”

But this winter he warned of a “duendemic” of Covid and flu – infections of both viruses at the same time or one after the other – that would put “substantial pressure” on healthcare.