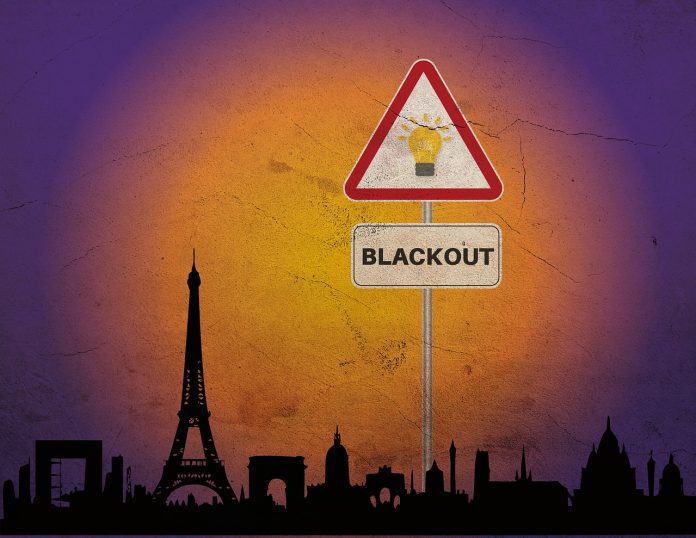 In France, the number of “Ecowatt Red Se” days will depend on temperature and the reopening of EDF nuclear power plants: 20 of the 56 are currently inactive, producing about 36 MW.

The month of December began as a sign of freezing temperatures, with rain and snow, engulfing Europe, already grappling with rising energy costs in recent months. Bad weather conditions, then, increase the need for electricity, and the increase in energy demand is already causing blackouts in many European countries for days at a time.

In Paris, unfavorable weather conditions earlier this week prompted Meteo France to set a level of “yellow alert” for rain that fell on very cold ground forming snow. The weather forecast for both Paris and various regions of France announces new showers with possible snowfall between this and next weekend.

With the worsening weather conditions, the government’s alert level also rises for the risk of blackouts, which has happened in recent times. President Emmanuel Macron and some ministers have called on French citizens to “make all the necessary efforts to get through the winter in the best possible conditions”, adding that citizens, companies and the state have a “collective responsibility” to reduce energy consumption appealed.

As mentioned, France has already experienced power cuts in recent days, a phenomenon that could repeat itself in the coming days as falling temperatures increase demand. On its part, energy utility EDF is fighting to bring more nuclear generation online.

Analysts said supplies could be tighter on Monday and Tuesday as temperatures eased in Europe after an unusually mild start to the peak demand winter season. Energy prices – which hit record highs this year – rose today, in response to jitters that demand will exceed supply.

“We expect a 2-8 GW supply gap, not just in the morning-evening peaks, but throughout the day from 7 a.m. to 9 p.m.,” said Refinitiv analyst Nathalie Gerl. This may cause power shortage. However, the government has said that any disruption will not exceed two hours and will be informed in advance.

The number of days “from Ecowatt Red” will obviously depend on the temperature and the speed at which EDF’s nuclear power plants reopen: 20 of the 56 are currently closed, with an output of about 36 MW, which will close on 1 40 MW should be reached in January 2023 and 43 MW at the end of the month.

The world’s seventh-largest economy is one of the world’s most nuclear-powered countries: typically, its fleet of 56 reactors produces more than 70% of its electricity and about 15% of Europe’s total energy through exports. . However, EDF has had to stop servicing several older reactors this year, even as Europe grapples with cuts in supplies of Russian gas used to generate electricity. It has left France’s nuclear output at a 30-year low, forcing the country to import electricity and plan for possible blackouts, as a cold snap widely across Europe drives up heating demand .

The director of the country’s energy regulator Emmanuel Wargan said next month the French nuclear fleet will probably reach an available generation capacity of 40 gigawatts. However, grid operator RTÉ says the country’s energy supply will be stretched even if EDF manages to meet its repair programme, and partial load shedding measures on cold days cannot be ruled out.

Macron’s plans for the short and long term

In the very short term, there is little that can be done to get more reactors up and running faster: the government is planning voluntary cuts during peak demand periods and trying to limit forced blackouts . Meanwhile, EDF and other French nuclear industries are trying to recruit the next generation of welders, fitters and boiler makers, setting up a new school to train them.

President Macron wants to give a new boost to nuclear power and has pledged to build 6 new reactors at an estimated cost of around 52 billion euros. As a first step, the executive is to buy out EDF’s minority shareholders and fully nationalize the debt-ridden energy group, which it sees as necessary to make long-term investments in new reactors.

Energy situation in the United Kingdom

France is not the only country experiencing a very delicate moment in terms of climate and energy. An equally complex meteorological situation is exactly what the United Kingdom is experiencing: the Met Office forecast temperatures of between 1 and 4 degrees (season averages are usually between 6 and 9 degrees) throughout the week and in many areas warns of decline. With possible snowfall in Scotland. At night the temperature in the column will drop several degrees below zero, with frost and snow on the way. In most parts of England, between 6pm today and 9am on 12 December, health workers have been advised to implement a cold weather plan. Despite rising energy prices, officials are urging Britons to use their own heating with a special focus on vulnerable people.

Registration successful, you should receive an email with which you should confirm your registration. Thank you, Your Team Start Magazine