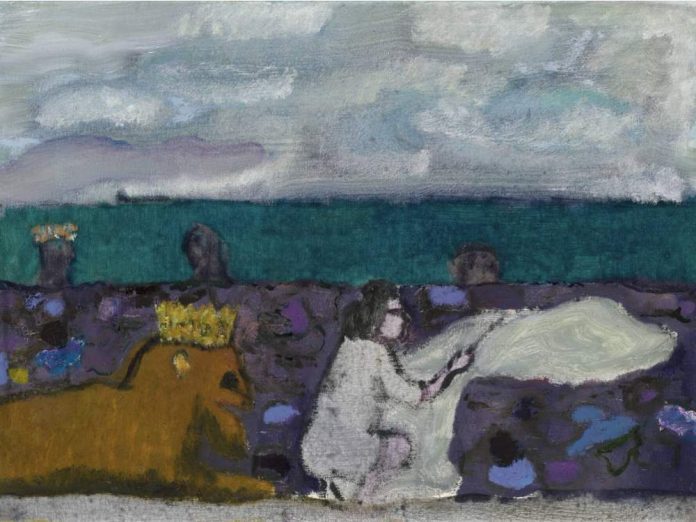 It was a Saturday afternoon when, on 23 July, Sergio Casoli went to Filicudi to welcome Peter Doig, a Scottish artist aboard a hydrofoil. For Casoli it was as if a brother had arrived, a close friend, even though they had only exchanged a few words between them. On 27 July Doug inaugurated a personal exhibition at the new art gallery opened by Casoli (Milan 1954), in a not very large space, featuring a bright and simple Aeolian style, which is at the Pension and Grand Hotel Sirena restaurant. which it manages since 2000, initially with Maurizio Catalan, a fishing village in Pecorini.

The Grand Hotel Sirena laps the beach with a clear but deep sea. Among the smallest and most secluded islands in the archipelago, which extends into the volcanic zone of the Aeolian Islands, Filikudi has maintained a virgin nature, in some ways harsh, surrounded by a deep blue sea. Over time it has proved to be a haven for personalities from culture and entertainment, who have rebuilt the ruins of abandoned houses, such as the legendary and Nordic Ettore Sottsos, who said in an interview: “I have a small house in Filikudi that I visit every summer and where I work. All the good works I have done, I could not do them in another solitude (…) I am interested in Mediterranean architecture in general, which is very modest, very attached to everyday life, hard-working , I like walls, doors, use of rooms… I am very interested in filikudi lighting,

Casoli landed on the island in 1990, when he had brought electric lights to Pecorini for almost a year and meanwhile already had a running history as an art dealer: he moved galleries from the Milanese space between Milan and Rome. opened, which was the studio of Lucio Fontana in Corso Monfort until the last in Rome in 2018, where he partnered with the small Mattia di Luca in Piazza Campitelli, near the ghetto. Filicudi is a fixed point in its existential geography, because, as Cassoli himself claims, the island that made it last forever, so much so that less than fifteen years ago it had an orchard and two hundred and fifty olive groves. Planted, which give it more than three hundred liters of genuine oil, above all for restaurant kitchens and especially for day-caught fish dishes.

Now the new Studio Casoli, as the gallery is called, open from June to September, will welcome artists and targeted projects, while for the rest of the month it will support artists’ residences. A space that maintains the free and informal spirit of Filicudi, so much so that visitors can enter even barefoot… A kind of “baptism” of the studio was held between June and July in tribute to the Milanese photographer Giovanni Gastel, whom Known in the international arena and disappeared due to covid. Gastel also had a strong passion for filikudi, as shown by the photographs on display.

From 27 July to 10 September it would be possible to visit the personal exhibition of Peter Doig (Edinburgh 1959), his second exhibition in Venice after 2015, held parallel to the 56th Biennale at the Bevilacqua La Massa Foundation. ,Scottish Gauguin» For his decidedly unconventional approach since his studies at London St. Martin’s School and for his original painting, which magically encapsulates the subjects of the paintings through the unusual use of perspective and colour. Gives dimension, more willingly bigger. Doig is also one of the world’s most popular painters, in fact in November 2021 one of his Christie’s paintings in New York, «Swamped» (1990), reached forty million dollars; The MoMA already has a few dozen works for some time, but there are other American and British museums and the artist is now respected by oriental collectors.How did Sergio Casoli come up with the idea of ​​opening a gallery in Filicudi?
In fact it happened for no reason or reason, I like to give myself a chance to settle things in the right way. I believe the opening of my gallery is something that eventually had to happen, that too as a result of my roots in the island.

Many things in his life seem to have been born by chance, but they produce something strong in him, such as the discovery of this island, I also think of Lucio Fontana, whose knowledge of painting marked him irrevocably. Is. In the winter in Milan, Fontana worked in the studio at Corso Monfort, in the summer he moved to his studio in Albisola in Liguria, a well-known center of ceramic manufacturing since Futurism, but news in magazines shows that the artist worked in the evenings. How animated the worldly life and enjoyed dancing.
Fontana was an authentic artist who always lived with great independence, respecting himself. I strongly share the world and the era in which I found myself growing up, in a relationship that did not put economic interests first. I’ll admit that I feel very close to Fontana.

Last year the «Italix», a national network of art dealers and antique dealers focused on a union between the art and beauty of Italian places, between history and nature, made its debut. Haven’t you thought of joining that program?
I never liked being a part of a system and any other initiatives or projects that might inhibit my freedom of choice.

How was Peter Dogg’s solo show born?
It was last summer when Peter came to my restaurant to eat. I don’t like to speak English, but by chance we exchanged a few words until I was having a pleasant conversation with him for half an hour. When I was about to leave, I went back to the booking to find out who I spoke to, so I went back to him and we officially introduced ourselves. Then on Christmas I called him in Filikudi to make a personal offer and he accepted. He will display seven or eight paintings, cards and fourteen drawings made for the exhibition, but we are considering whether to display them in the bar at the Grande Hotel Sirena.

Will this lead to a long lasting working relationship?
I never took aim before the randomness of events.

What are your future plans for the gallery?
I’ll only know in autumn, when I’ve kicked off this first exhibition season.