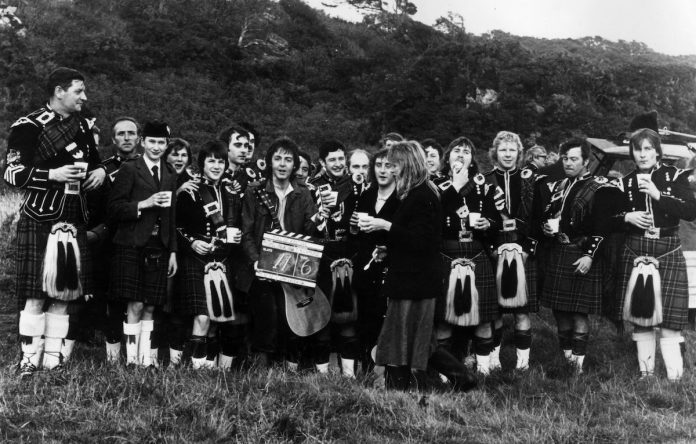 Released in November 1977, a turbulent time for British society and the music scene, swept away by social upheaval and a wave of punk, Mull of Kintyre It was a counter-current choice, one that was potentially risky for McCartney’s future career. Instead he renewed his fortunes: “Proposing a song in Britain as familiar as Christmas pudding, as seasonal” (Woffinden) confirmed that audiences viewed McCartney’s music as a privileged expression of traditional values. I recognized.

There was a wave of punk rebellion that threw all the anger of the new generation against the institutions and establishment. The upheaval of the rebellion came at a difficult time for the United Kingdom, which faced national strikes throughout the decade (including miners in 1972 and 1974, who forced the country to use rationed electricity). Rising inflation and stagnation of wages. Social tensions culminated in the actions of so-called squatters, who stormed and forcibly occupied homes, as opposed to speculation about house prices, which had led to an incredible surge.

In such a complex socio-economic framework, McCartney was the victim of heavy skepticism about publication – as a side that he had planned – Mull of KintyreWaltz with an almost Christmas atmosphere, or rather girls school, an aggressive rock song. He surrendered to his uncertainty and sought advice from Bob Mercer of EMI’s marketing department, who had worked hard to convince him of EMI’s commercial potential. Mull of Kintyre, of which Paul “thought he would not sell a copy.” McCartney’s solution, despite Mercer’s favorable opinion, was not to risk at all, and the song was proposed as an accompanying double A side. girls school, which however served as the main façade in America. McCartney: «We just missed him not coming out. At that time the music was just punk. But I checked with some young people: they liked it, and so we published it ».

Paul wrote Mull of Kintyre With the intention of reviving the tradition of Scottish folk song. It is a small tribute to the Kintyre Peninsula, where Paul took a refuge in December 1964, which he always believed to be a symbol of freedom. McCartney: “It’s a place in Scotland, a large peninsula that extends long enough towards the sea. So I went to the piano and thought I’d like to write a song with Scottish flavor ».

McCartney’s demo, probably put on tape at Cavendish Avenue around 1973, is certainly primitive, but shows an already recognizable melody. Mull of Kintyre It was revived in the summer of 1976 and became a four-handed collaboration with Denny’s Line. Even if with some shade. Line: “We sat in the Kintyre hills with a bottle of whiskey one afternoon and wrote the song. Paul had the chorus music, but the rest was composed together and most of the lyrics are mine. The song was a phenomenal success, but personal apparently it was very little because of me [queste dichiarazioni sono poco precise. La demo di McCartney comprende anche la strofa e può̀ darsi che Laine si riferisca al fatto che anni dopo avrebbe venduto i diritti delle canzoni scritte assieme a Paul per fare fronte alla propria bancarotta, forse ricavandone una cifra inferiore alle aspettative], When I asked Paul for the percentage, he went on to say: “I am Paul McCartney and anyone who writes with me is a privileged one.”

To give the song a folk touch, Paul decided to enrich it with the distinctive sound of the bagpipes, and in acoustic demos recorded shortly after completing the song, you can also hear a synthesizer with a sound similar to this instrument. . Knowing that bagpipe bands are the pride of many towns and villages and that Campbelltown had one, McCartney turned to a handful of boys and gentlemen who could, as a hobby, finish shifts as barbers or do schoolwork. After completing it was a pleasure to play, like Ian McCrell, a very young student at the time. McKerrell: One day Tony Wilson, the head of the Campbelltown Pipe Band, came to us and told us that Paul McCartney had approached him for a song. I thought he was joking with us. Tony met Paul and Linda, who played him on keyboards.

Wilson was invited to Paul’s estate for the song to take shape. McCartney: “Tony came in with the bagpipes. We sat down in the kitchen and I told him to play some while I was working on some chords. He replied: “It’s better we go out into the garden, the sound of the bagpipes.” Too loud!” » However, the song had to be adapted to the key of the bagpipe. McCartney: “I noticed that for the most part the band was playing in D Major, so I looked for a solution that suited their key Ho … in fact,” we only played the bagpipes in the chorus, because there was a note in the poem. That they could not receive! ».

After “a month of rehearsal”, the Campbelltown Pipe Band (of which fourteen members were recruited, whose names and faces have been immortalized in a precious vintage photo) joined the studio attached to Paul’s farm to tape the song. Went. Recording, supervised by Geoff Emerick with assistance from Tim Somerhees, took place on August 9 on the front lawn of the Campbelltown estate, where a mobile recording unit owned by RAK Studios was established.

Sitting on a stool, Paul recorded the bass track while playing acoustic guitar and sang along to the line on a second acoustic guitar. The voice needed to be provided by hand to limit outside noises such as wind and rustle. Summerhes: “We moved the mobile recording unit to the field and it took a long time to prepare the control room and recording area. We moved the van’s equipment to a makeshift control room. Paul recorded vocals and acoustic guitar outside. The wind was blowing and we didn’t have a microphone filter… so we covered it with a sock, given to us by John Hamel, one of McCartney’s roadies, with the British flag drawn on it. [Il ricordo del fonico è confermato da una fotografia scattata durante l’incisione], Then we recorded the bagpipes, placing ten microphones around the band… As we were playing the tape backwards, we noticed something strange… They looked like oil stains… It was dusk and it was dark… Moths attracted by the lights near some cars, were crushed as soon as the tapes started spinning! So we cleared everything up… That tape with clues to what happened is somewhere in the Abbey Road archives! ,

Recording with the bagpipe band was light-hearted. McKerrals: Paul was very relaxed. In an hour we recorded everything, then we ate, drank a few beers and ended with a party … but I could not stay anymore, the next day I had to go to school … ». Just before this recording, Jimmy McCulloch left Wings, apparently after a bad argument with McCartney.

Mull of Kintyre Was completed on 3 and 4 October 1977 at Abbey Road. McCartney finished recording with other acoustic guitar and backing vocals, for which he called on Ian Baronson and Dave Patton, guitar and bass of the Alan Parsons Project, who were stationed in the studio to attend. Near. Baronson: We were working on the album I, Robot and the song crowd of two When once a guy in the studio next to us called us because he wanted to add an authentic Scottish voice to a song he was working on… ».

punctuated by acoustic guitar with his slow three-quarter move, Mull of Kintyre This is a waltz sung around the hearth. As with guitar, the arrangement includes only bass (this may be acoustic zemitis) and some touches on drums (English): at 1:22 the bagpipes enter first and then the drums, while at 1:34 a change of key ( from A to D) conceived by McCartney and required for correspondence with the key of the instrument.

Mull of Kintyre The Wings British Tour was played in 1979, and in subsequent decades it was always offered on selected dates in Scotland or Canada and Australia, where significant Scottish communities exist. The performance on June 30, 1990 in Glasgow during the Paul McCartney World Tour is a performance that captures the song’s choral essence and audience enthusiasm, drawn by McCartney in Evenings of Grace.

alone Mall Of Kintyre / Girls School It was released in Great Britain on November 11, 1977. while in the United States girls school Struggled to reach only n. 33 on Billboard, in England it was Mull of Kintyre To sell at 250,000 copies per week for two months: some critics tried to speak badly of it (Charles Murray on the New Musical Express called the song “really crap”), but the majestic song was gone. It topped the charts in the United Kingdom, where it remained for nine weeks: in January 1978 it sold two million copies.

feathers boosted Mull of Kintyre With three clips: Official video – shot October 13, 1977 at Saddle Castle near Kintyre Headland, with the entire bagpipe band – second clip shot at Abbey Road on December 2 and at Elstree Films Studios between 9 and 9 Third video done. and December 11, under the direction of Nicholas Ferguson, which also featured the Campbelltown Pipe Band. The Wings sealed their promotional activity by participating in The Mike Yarwood Show aired on Christmas Eve: Paul sang live on a pre-recorded basis. The broadcast was a huge success: it was estimated that around 40% of the British population, equivalent to twenty-two million viewers, attended.

Mull of Kintyre became the best-selling single of all time in England, surpassing she loves you of the Beatles, a record awarded to him in 1984 Do they know it’s Christmas? by Band Aid. The piece was at n. #1 in Australia, New Zealand, Germany (250,000 copies), Austria, Belgium (100,000 copies), Switzerland, Ireland (100,000 copies) and the Netherlands.

A small case came to the fore in a few weeks in which Mull of Kintyre There was a ruckus in the standings. The players of the Campbelltown Pipe Band – who were paid the lowest wage rate – complained to the press that their input was instrumental in making that particular sound. Gang leader Tony Wilson had no doubts about claiming merit. Wilson: “The kids are proud to play this song. McCartney is a genius. The sound of the bagpipes is essential, but we won’t take royalties on the sales, they already paid us for the session. Then Paul gave them two hundred Send pounds extra.

The song’s popularity also had a beneficial effect on Kintyre tourism, which grew by 20%. Requests began to pour in from countries such as Saudi Arabia, Libya and Abu Dhabi, offering Campbelltown musicians £30,000 a year to reveal the secrets of the bagpipes to their military bands.

Mull of Kintyre It would have left a unique legacy in McCartney’s later Beatles, becoming the second national anthem in Scotland, also used by fans in stadiums during football matches. next album London Town will show – as already done Rs. band onn – that the numerical downsizing of the wings does not represent a constraint. The record’s success would have introduced McCartney beyond scratch-punk, guaranteeing him fame and acclaim by the end of the decade.

adapted from Paul McCartney: Music is the idea. The Stories Behind the Songs (Volume 1) 1970-1989 By Luca Perasi, Lilly Publishing.