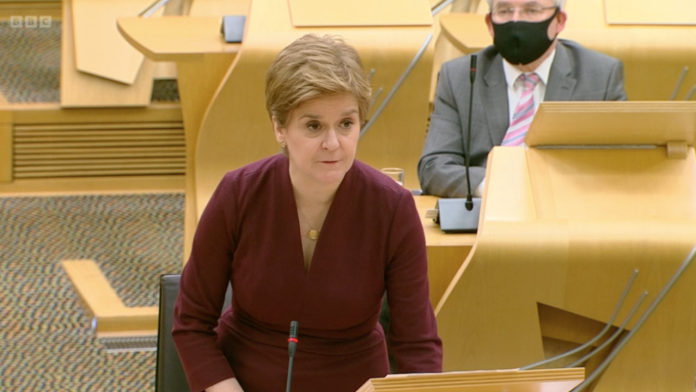 LONDON (ROBERTA CHIATTY) – The Scottish prime minister recently announced that no other changes will be introduced for Christmas but that some events will be canceled starting 26 December.

From 26 December, for three weeks, football matches must be held without spectators and Hogmanay celebrations will be cancelled. Not only this, for three weeks from 27 December, all Scottish pubs and restaurants will be able to serve tables only when alcohol is served and social distancing of 1 meter is implemented again.

Restaurant staff are already over and thinking about the consequences that Omicron will implement in version 2022, such as a possible total lockdown. To manifest it, live London One RadioThere was a 25-year-old girl, Gabriella, who works in an Edinburgh restaurant:

“There is a feeling that (Scotland) would like to close soon after Christmas with at least 3 weeks of lockdown” – declares Gabriella.

Rosita Dagh, the host of the show “Direct Line”, pressurized the audience and asked if the restaurant was the first to know such news before the government made an official announcement to the public. Gabriella replied sensibly, saying that “There is communication”.

According to Gabriella, if there was a lockdown, there would have been a problem as well.a salvation”,

“If you lock down for at least 2 weeks, the state should theoretically give you a hand, for example helping you pay back expenses, losses, deposits to customers. […],

On the other hand, when restaurants are left open and people are invited to stay at home, it becomes a problem for those restaurants who have to bear the expenses of the venue and beyond.

In all this, a few hours ago, the British Chancellor, Rishi Sunak also intervened, confirming the financial support for the entire hospitality sector, amounting to 1 billion pounds. There will be a cash grant of up to £6,000 per position for each company eligible for the programme.

Hear the full interview with Gabriella on London ONE Radio: