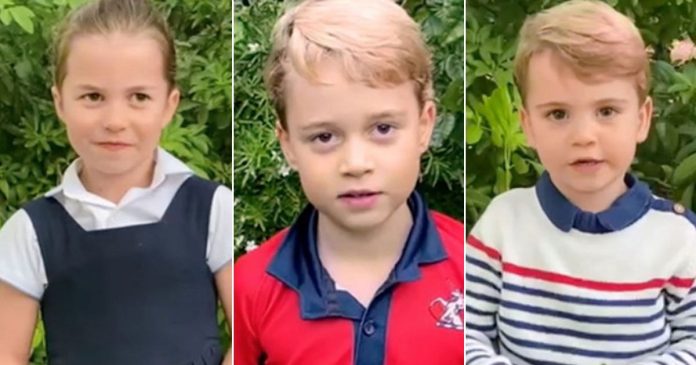 Fans of the royal family have a rare opportunity to hear the children speak and see how much they have grown.

And it is believed that Prince Lewis was ever captured talking on camera.

This sweet footage was released by Kensington Palace and belongs to the Duke and Duchess of Cambridge.

In the video, three royal children take revenge on Sir David for asking their questions.

Looking intently at the camera with his hands clasped behind his back, Prince George, seven, first says, “Hello David Attenborough, which animal do you think will go extinct next?”

Next up is Charlotte, a five-year-old who says, “Hello David Attenborough, I like spiders, do you like spiders too?”

And then there’s Little Louis, Bay No, who asks the Pte broadcaster, “Which animal do you like?”, Although it sounds a little more like “Amimal.”

Of course, Sir David gives great detailed answers to all his questions.

He attended the private inspection of his new environmental documentary group with the Duke Camf Cambridge – held in the palace grounds.

The young prince was photographed handling fossilized teeth from the extinct Carcharoclis megalodon – one of the most feared hunters with a sword at sea – and looked funny.

Then, William and the Pte broadcaster saw A Life Our Not Our Planet, a revealing and powerful first-hand account in which Sir David reflects on the determined moments of his life as a naturalist and the devastating changes he saw.

Socially isolated in the open air, the Duke Camf of Cambridge and Sir David were offered the director’s chair, whose names were printed on the back – but instead of the plan they sat in each other’s seats.

After the screening on Thursday, the 94-year-old broadcaster chatted with William, Kate and their three children George, Princess Charlotte and Prince Lewis.