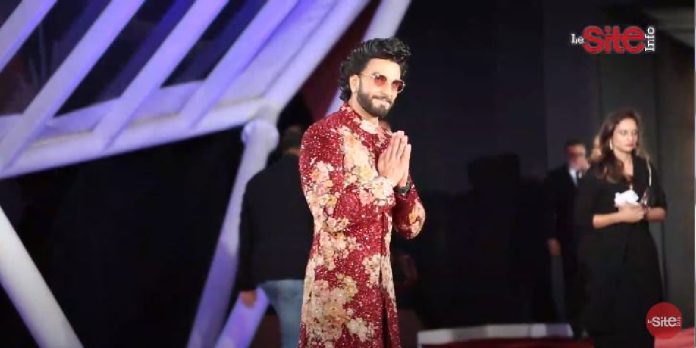 With Map by LeSiteinfo

Under the high patronage of King Mohammed VI, the 19th edition of Marrakech International Film Festival (FIFM) got a special tribute to Indian actor Ranveer Singh on Friday evening.

During this tribute ceremony, marked by the presence of the most illustrious stars of national, Arab and international cinema, as well as personalities from the arts, culture and media, Bollywood star Ranveer Singh thanked the Festival Foundation. He was awarded the Gold Star by the advisor to the President of the Foundation, Melita Toscan du Plantier.

The Indian actor did not fail to express his happiness to be in Marrakech as well as express his love for his fans from the city of Ocher, who welcomed him in a warm and festive atmosphere.

The Asian star felt that this tribute would serve as an inspiration to continue creating more innovative and creative works in the future while expressing pride in representing Bollywood cinema on the occasion of this great cinematic event.

“Today we are celebrating a great actor with a strong original personality”, welcomed Melita Toscane du Plantier in a speech before the presentation of the Étoile d’Or to the Indian star, adding that almost in a decade The twenty films all helped transform Indian popular cinema.

He added, “Self-educated, a complete outsider, Ranveer Singh has become the most popular icon and a celebrity beyond India’s borders.”

And to add that a significant part of the formation of his personality as an actor took place in front of the camera of “a master, Sanjay Leela Bhansali, director of the famous Devdas”, which made him a star in three films.

On this occasion, Toscan du Plantier spoke about the FIFM experience with Indian cinema and Bollywood stars, especially those who participated in the previous editions of the festival and who are welcomed each time by the Moroccan public who are still as Very enthusiastic and excited. Junooned as ever.. During the ceremony, clips from Ranveer Singh’s most prominent films were shown to the appreciation of the audience.

After the tribute ceremony, Marrakesh met with the Indian star at Jemaa el Fna Square.

One of India’s greatest actors today, Ranveer Singh has become one of the most popular youth icons of the subcontinent, and a celebrity beyond its borders.

This highly talented actor refuses to be pigeonholed in both his choice of roles, his eccentric taste in clothing and his hilarious sense of humor.

Right from his childhood, he wanted to embody the quintessence of the hero of Indian films. After a rough start, he managed to establish himself for the first role in Band Baaja Baaraat, which was very successful and launched his career.

Ranveer Singh is one of the most talented actors of his generation, especially thanks to his roles in “Simmba”, “Gully Boy”, “Goliyon Ki”, “Raasleela”, “Ram-Leela”, “Bajirao Mastani”. . And the wonderful “Padmavat”.

In line with its desire to celebrate the diversity of world cinema, the 19th edition of FIFM, along with Bollywood star Ranveer Singh, will pay tribute to three other eminent personalities from the world of art on the 7th in recognition of their remarkable artistic and professional careers. ,

These include the famous Scottish actress Tilda Swinton, the legendary American director James Gray and the pioneering director of Moroccan cinema, Farida Benlayazid.