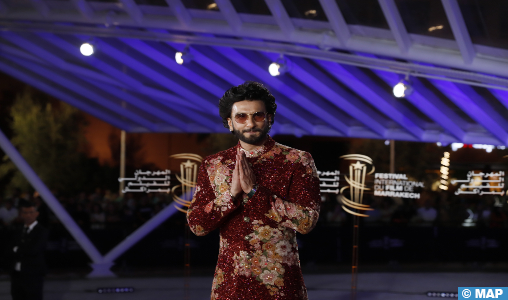 The Indian actor did not fail to express his happiness in making an appearance in Marrakech as well as expressing his love for his fans of the city who welcomed him in a warm and festive atmosphere.

“Today we are celebrating a great actor with a strong original personality”, Melita Toscan du Plantier welcomed the Indian star in a speech before the presentation of the Etoile d’Or, adding that in a decade about twenty Movies helped transform all Indian popular cinema.

“Self-taught, complete outsider, Ranveer Singh has become the most popular icon and a celebrity beyond the borders of India,” she said.

On the occasion, Mrs Toscan Du Plantier highlighted FIFM’s experience with Indian cinema and Bollywood stars, especially those who participated in the previous editions of the festival and were welcomed by the Moroccan public every time, who are still equally enthusiastic and curious.

During the ceremony, clips from the most prominent films of Ranveer Singh were shown to the admiration of the audience.

After the tribute ceremony, the Marrakechs were appointed with the Indian star at the Jemaa el Fna square.

One of India’s greatest actors today, Ranveer Singh has become one of the most popular youth icons of the subcontinent, and a celebrity beyond his borders.

Since childhood, he wanted to embody the quintessence of the hero of Indian films. After a rough start, he managed to find himself thanks to the first role in Band Baaja Baaraat which was very successful and started his career.

These include the famous Scottish actress Tilda Swinton, the great American director James Gray and the pioneer of Moroccan cinema, director Farida Benliazid.