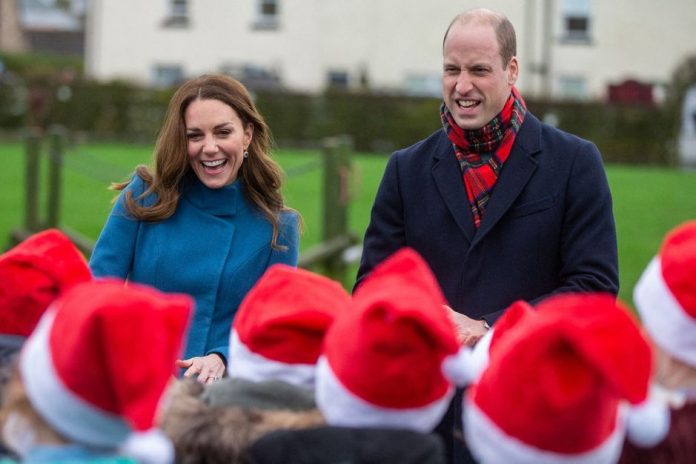 On Monday, Kate Middleton and Prince William began their two-day tour in Scotland with a stopover.

The Royal Train was re-spotted this Monday, December 7, 2020, hours after being photographed between Kate Middleton and Prince William departing from Euston Station. 48-hour trip to the United Kingdom to meet frontline workers, the Duchess and Duke. Cambridge first started its day after arriving at Edinburgh station, then moving to a rescue center near the capital at Newbridge.

Wearing a blue Catherine Walker coat, Kate was as chic as ever. William, along with his wife, in a navy blue coat and pants, covered with a red checkered dupatta. Cambridge spoke to paramedics, taking time to listen to their experiences in the last few months marked by the coronovirus crisis, cheering them on and praising them for the job they did.

Later, the parents of George (7), Charlotte (5) and Louis (2) traveled to Berewicke-on-Tweed, an English town near the Scottish border, to visit the primary school. Welcomed by a group of children wearing Christmas hats, the majestic couple also encountered reindeer. “The Duke and Duchess stepped in to recognize the invaluable work of teachers, including their efforts to open schools for vulnerable children and children of critical workers during the epidemic, and how they provided e-learning to students at home, “Has been reported on. His Instagram account.

Kate and William will travel inclusive until Tuesday evening. He will also travel to Wales. Their schedule was not disclosed in advance for safety and to avoid gatherings. As the magazine states, “Hi!His visit coincides with the announcement of his new patronage for NHS Charities Together, which provides financial support to hospitals in the United Kingdom.

Any reproduction is prohibited.