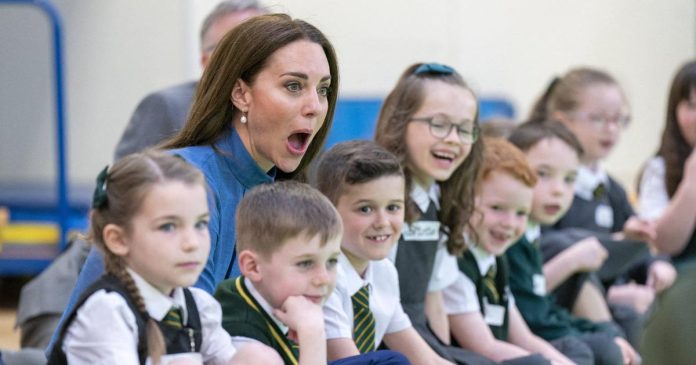 The Cambridges arrived in Scotland on Wednesday 11 May on a two-day official visit. Opportunity to get in on some jokes for him at a primary school in Glasgow.

Forgot the Cambridges: In Scotland, Prince William and Kate Middleton would use the titles of Earl and Countess of Strathearn, as is customary. The couple, who arrived on Wednesday, May 11, for a two-day official visit, did not take the stuffing approach. Both went to St John’s Primary School in Glasgow. An official outing that took place in a good-natured atmosphere.

In video, Prince William holds an umbrella to protect Kate Middleton from the rain

for the joy of the heart

Prince William and Kate Middleton have actually joined a group of students attending a workshop on the topic of empathy. Opportunity for the couple to have fun, between grins – far-off mouths, extra-wide smiles and bowed heads – and joyful conversation. Ignoring all protocol: the couple actually sat on the ground, cross legged. A most interesting journey for Kate Middleton, who launched a foundation dedicated to the emotional and mental well-being of young children in 2021.

The same day, the princely couple met with representatives of the Scottish housing group Wheatley, which provides housing for the homeless. George’s parents, Charlotte and Louis, later went to the University of Glasgow, where they discussed the topic of mental health with students, scholars and alumni. A day earlier, Prince William and his wife went on a more solemn visit to Manchester, as part of the opening of a memorial dedicated to the victims of the 2017 attack at Manchester Arena.