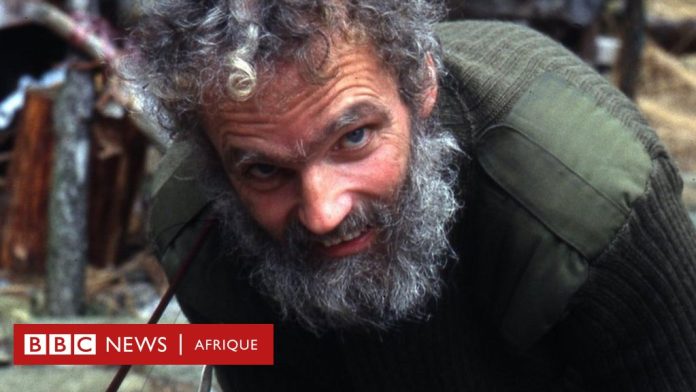 For nearly 40 years, Ken Smith has abandoned the traditional life and lived without electricity or running water in a handcrafted log cabin on the shores of a remote end in the Scottish Highlands.

“It’s a good life,” Kane says. “Everyone wishes they could do it, but no one ever does.”

Ken’s secluded and secluded lifestyle of pasture and fishing, but collecting firewood and doing laundry in an old open-ended tub, is far from the ideal model for many of us. Especially at the age of 74.

Their log cabin is a two-hour walk from the nearest road, on the edge of Rannoch Moor, near Loch Tregg.

“It’s called the lone loach,” he says. “There are no roads here, but people used to live here before the dam was built.”

Looking down from the hill, he said, “All their ruins are below. There is only one left, and that is me.”

Filmmaker Lizzie McKenzie first made contact with Kane nine years ago, and for the past two years he has been filming for the BBC Scotland documentary The Hermit of Tregg. [l’Ermite de Treig],

Ken tells how he started working at the age of 15 by building a fire station.

But his life changed at the age of 26 when he was beaten up by a gang of thugs after a party.

He suffered a cerebral hemorrhage and remained unconscious for 23 days.

“He said I’d never run again, but I succeeded.

“That’s when I decided I would never live on anyone’s terms other than myself,” he says.

Ken began traveling and became interested in the idea of ​​the jungle.

In Yukon, the Canadian territory that borders Alaska, he wondered what would happen if he left the highway and was “sent to the void”.

So he claimed that he covered a distance of about 35,405 km before returning home.

While he was away, his parents died and he only came to know about it when he returned.

Ken was traveling across Britain and Rannoch in the Scottish Highlands when he suddenly thought of his parents and started crying.

“I cried the whole walk,” he says.

“I thought: What is the most unique place in Britain?” Ken says in the documentary.

“I went around and followed every bay where no houses were built.

“Hundreds and hundreds of miles of emptiness. I looked across the lake and saw this forest.”

He knew he had found the place he wanted to be.

Ken says that’s when he stopped crying and wandering around constantly.

He first set out to build a log cabin, after experimenting with the design using small sticks.

Four decades later, there’s a nice log fire in the cabin, but no electricity, gas, or running water, and notably no cell phone signal.

Firewood should be harvested in the forest and transported to a secluded shelter.

He grows vegetables and collects berries, but his main source of food comes from loach.

“If you want to learn to live an independent life, all you have to do is learn to fish,” he says.

In February 2019, ten days after director Lizzie left the cabin, the dangers of Kane’s isolated existence were highlighted when he suffered a stroke while out in the snow.

They used a personal GPS locator beacon supplied a few days earlier to trigger an SOS, which was automatically sent to a response center in Houston, Texas.

He informed the British Coast Guard and Kane was taken to hospital at Fort William, where he spent seven weeks recovering.

Staff did everything they could to make sure he could have an independent life and doctors tried to get him back to civilization where he would have an apartment and caregivers. But Ken just wanted to go back to his cabin.

However, he suffered “double vision” after a stroke and his memory loss forced Kane to accept more help than before.

The leader of the Trackers’ estate, who looks after the forest where Ken lives, brings him food every two weeks, which he pays for with his pension.

“People have been really nice to me lately,” Kane says.

A year after his first rescue, Kane had to airlift again after being injured by a pile of logs that fell on him.

But he says he is not worried about his future.

“I’ll be here until my last days come, that’s for sure.”

“I’ve had a lot of incidents but I feel like I’ve survived them all.

“I am bound to fall ill again one day or the other. Something will happen to me that will kill me one day, as happens to everyone.