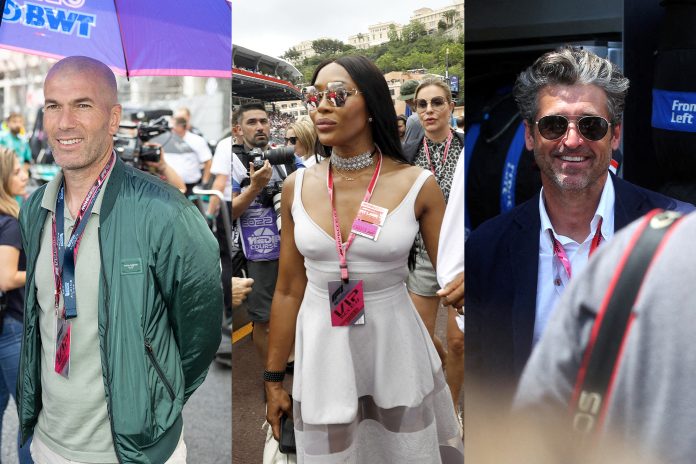 paddock, pitlane or starting grid. This weekend, several celebrities were taking a stroll in Monaco during the famous Formula 1 Grand Prix. In the Haas garage, Mick Schumacher crossed paths with former MMA champion Conor McGregor. Smiling and hugging, the two athletes took the time to talk. On the other side of the pitlane, in the Redbull garage, another star was seen: Patrick Dempsey. Without forgetting Jacob Elordi, who was also appointed on Saturday 28 May as the new Monaco ambassador for Swiss luxury brand, Tag Heuer.

On Sunday 29 May, minutes before the start of the Monaco Grand Prix, Naomi Campbell was seen on the opening grid chatting with seven-time world champion Lewis Hamilton. The British model has apparently extended her stay in the south of France after appearing on the red carpet at last week’s Cannes Film Festival.

Alpine’s VIP guest Zinedine Zidane was accompanied by his wife Veronique. Other personalities were also present such as the President of Rwanda, Paul Kagame, former Belgian pilot Jackie Ickx and his wife Khadja Nin, or even Izabel Goulart and her fiancé Kevin Trapp.

At the end of a delayed, rainy and somewhat troubled race, it was against all odds that Redbull driver Sergio Pérez won. On his side on the podium, it was not Monegasque Charles Leclerc, who started from pole position, but Carlos Sainz and Max Verstappen, second and third respectively.

Also in pictures: Florence Forney, Elodie Fontan and Philippe Lacheu as a couple … stars of Roland-Garros