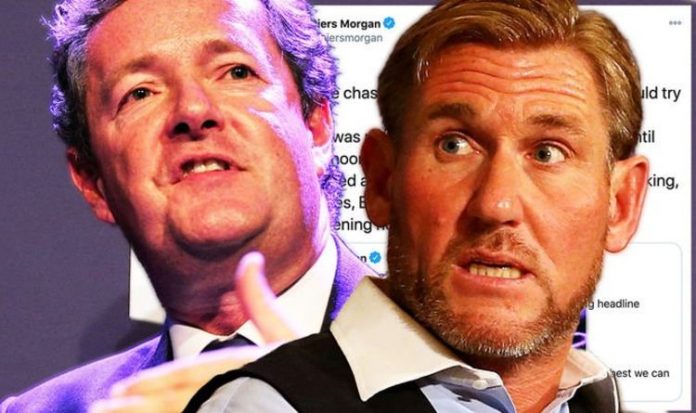 201 days later, the health secretary became the first government minister to appear at the ITV breakfast after the “boycott”. During the interview Mr. Hancock was asked why he did not offer to resign due to the management of COVID-19.

However, Mr Morgan and his co-host Susanna Reid were later charged with “chasing headlines”.

“What was the point of this interview? બે Two presenters chasing headline creation!

“We didn’t learn anything about the vaccine or the current one.

Matt Hancock appears after a 201-day boycott on the GMB (Photo: Downing Street)

“They apologized for the tweets 6 months ago… Is this the best we can do ?!”

“A) Yes, we chase news headlines … you should try it!

“B) I hadn’t heard anything new about the vaccine until this afternoon.

But he tried to listen, saying Mr Jordan hit back at the presenter but Mr Morgan, the health secretary, was “busy talking up”.

Cases of coronavirus in the UK were mapped (Photo: Express)

“Instead of trying to get cheap popcorn headlines, wouldn’t you educate and inform your audience?

“I tried to listen to BTW, but it was hard to hear what that misleading Matt Hancock was saying because you’re busy talking about it again (again!).”

During the interview, the fighting TV presenter asked the minister if he had been “for the last 201 days”.

Mr Morgan added: “Do you think it is right and proper that the country has faced this biggest health crisis in 100 years that you have boycotted a morning breakfast television program as health secretary and the entire cabinet and prime minister, and our Viewers, for six months? “

To which Mr. Hancock replied: “We are not staying away. I am staying … working very hard.

“I’m here to answer any questions you may have on behalf of your audience.”

Mr Hancock also acknowledged that we had made “mistakes” during the epidemic that killed more than 20,000 people in the UK.

He cited guidance which is meant to prevent spouses from attending the funeral of a person who has died from coronavirus.

“It was wrong and we changed it,” Mr Hancock said.

The Health Secretary also pointed out that the knowledge of asymptomatic transmission of COVID-19 has given an understanding of the change in the rules for care homes.

See also  When will Springwatch 2021 start on BBC Two?

Mr Morgan asked Mr Hancock if it was “morally constipating” that health workers might have to pay the hospital’s parking charges after the Covid-19 epidemic ended.

The health secretary said: “There are no such expenses now. And this will not happen during the epidemic.

“Once the epidemic is over, we will no doubt return to this question.”