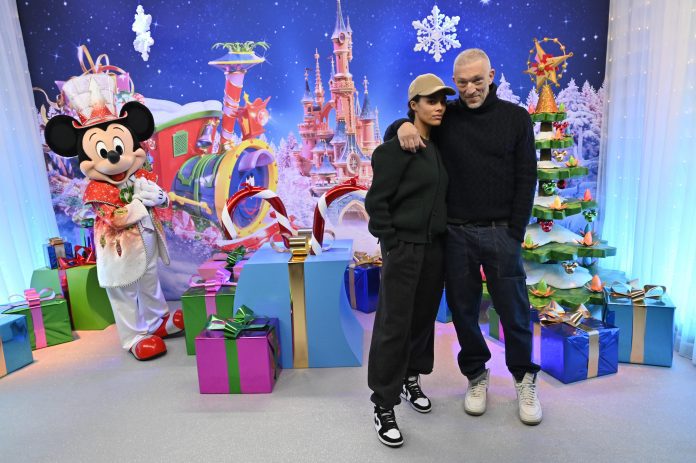 Surrounded by their families, many celebrities spent the weekend at Disneyland Paris for the launch of the Christmas celebrations. Vincent Cassel and Tina Kunaque, along with their little Amazons (age 2), join the new parade, not far from Spanish actress Maria Pedraza of “La Casa de Papel”.

“This new parade is a surprise because there’s a daytime version and when night comes it’s a new show with hundreds, thousands of lights illuminating these floats and a new story to tell,” Disneyland Paris Director of Emanuel Lenormand explained. Each of the five floats represents scenes and decorations typical of Christmas celebrations, created by performers who also dress up in bright costumes.

Snow and a 24-meter pine tree

Virginie Efira, Alice Taglioni, Karine Ferri and pastry chef Cedric Grolet pose with Mickey and Minnie in their best festive costumes. Singers Clara Luciani and Jennifer were photographed in the park of Marne-la-Valli. Black M, along with his wife Leia Jadja, were also present.

A 24 meter high tree, decorated with many garlands and Christmas balls, is placed to welcome the visitors upon their arrival. The artificial snow that falls throughout the day adds to the unique atmosphere of the year-end celebrations. The little ones will have the chance to meet Father Christmas (the real one!) until December 25, surrounded by reindeer.