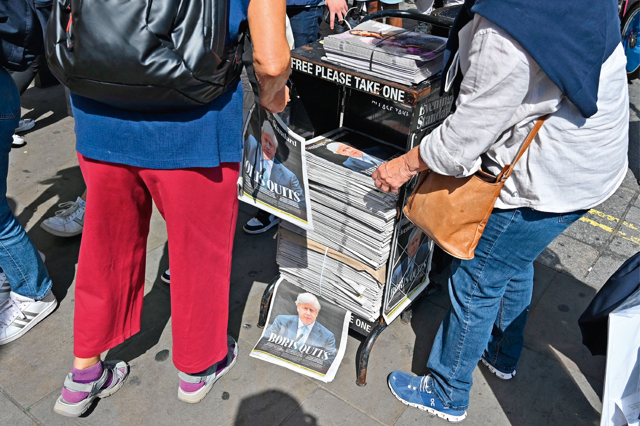 Boris Johnson’s government has finally collapsed. For months the Prime Minister has been avoiding scams one after the other. Now, irrevocably discharged by his own deputies, he has accepted the end of his mandate. He asked to remain in office until the fall, but it would be better if he left immediately.

Johnson has been doomed by his own foul play, and some might think that a simple change of leadership would be enough to get Britain back on track. I wish if it happens. Although the chaos of recent times is largely his fault, the problems go far beyond him. If the Conservative Party does not find the strength to face this fact, Britain’s social and economic difficulties will only increase.

To the end Johnson tried to stay in power, claiming to have a direct mandate from the people. It was always nonsense: its legitimacy comes from Parliament. Like former US President Donald Trump, the more he clinging to his chair, the more ineligible he became of his office. The way he left, the way he ruled, Johnson showed a brazen disregard for the interests of his party and country.

His fate was sealed on 5 July, when two ministers resigned. The triggering incident was the behavior of the deputy leader of the Conservative Party, who was accused of molesting two men while intoxicated. The prime minister lied what he knew about past abuses, and sent his ministers to repeat those lies, as he had done months ago about banned parties held during the COVID-19 pandemic. Desperate for another scandal, more than fifty ministers, aides and diplomats have resigned. Ultimately the government had so many holes that it could no longer function.

Conservatives hope that the party’s suffering is also about to end. But for this to happen, they have to take the right lessons. It’s about a character. Johnson rejected the idea that the ruling meant choosing. He lacked the moral depth required to take difficult decisions for the betterment of the country at the cost of losing his popularity. They also lacked the consistency and dexterity of details needed to complete their projects. And he enjoyed trampling rules and traditions. Behind his style was an unshakable belief in his ability to get out of trouble by manipulating words. Cornered, Johnson knew how to charm, procrastinate, procrastinate, and lie. Sometimes he would even go as far as to apologize.

As a result, the best they have done, such as buying COVID-19 vaccines and supporting Ukraine, have been hit by scandals elsewhere. Where there should have been an overview there was a void. The crises did not distract from government activities: they had become the main activity of the government. As the scams grew, so did the lies. In the end there is nothing left.

Conservatives were quick to blame Johnson’s personality for everything. But their departure would be cathartic, if they accept an even more uncomfortable truth. Johnson was the answer to the party’s contradictions. Many of the Tory MPs belong to the liberal tradition, oriented toward free markets and tax cuts, but others, many of them from northern constituencies, belong to the new interventionist and protectionist wing. It was the latter that gave Johnson a majority of 87 seats in the last election, and he will be the key to the conservatives’ fate in the next.

Johnson was able to unite these factions with his charisma, as he never felt the need to resolve their contradictions. He was in favor of both protectionism and free trade agreements; He wanted to break the bureaucracy but then punished energy companies for high prices; It planned big public spending but promised huge tax cuts. It was a policy of confusion, which can be traced back to Brexit.

During the campaign for the referendum on leaving the European Union, Johnson promised voters that they could have everything they wanted: more money, less Europe; More freedom, less rules; More mobility, less immigration. It worked so well that the illusion became the organizing principle of conservatives. Nowhere is this as evident as in economics, where lies the third lesson for the next government. Johnson has often claimed that the whole world is envious of Britain’s achievements, but the truth is that the country he leaves is facing deep social and economic problems. It has the highest inflation in the G7, and the government’s liberal deficit spending could increase it further. In the ten years before the financial crisis of 2007-2009, GDP grew by 2.7 percent per year, compared to the average of 1.7 percent today. Britain is stuck in a low productivity phase for 15 years. In 2023 it is expected to register the slowest growth of the entire G7.

As if that wasn’t enough, this broken engine will have to go through extraordinary efforts. From railway workers to lawyers and doctors, anti-labour movements are expanding. As the cost of living rises, a firm government is needed to stay afloat. The country is getting old. From 1987 to 2010, when the Conservatives came to power, the percentage of the population over 65 remained stagnant at 16 percent. Today it is 19 percent, and by 2035 it will reach 25 percent, increasing the burden on the welfare state and healthcare. The UK also needs to accelerate the transition to a zero-emissions economy, which requires large investments. It has ambitions to count in a world in which Russia and China have a big voice, but its armed forces are small and poorly equipped. Scotland and Northern Ireland are restless, and the government has no plans to appease them.

Britain is in a dangerous position. The country is poorer than you think. The trade deficit has widened, the pound has fallen and interest rates on debt are rising. If the next government insists on increasing spending and cutting taxes at the same time, it could be in trouble. The time when everything was possible is over. Politics must again be grounded in reality with Johnson’s departureas