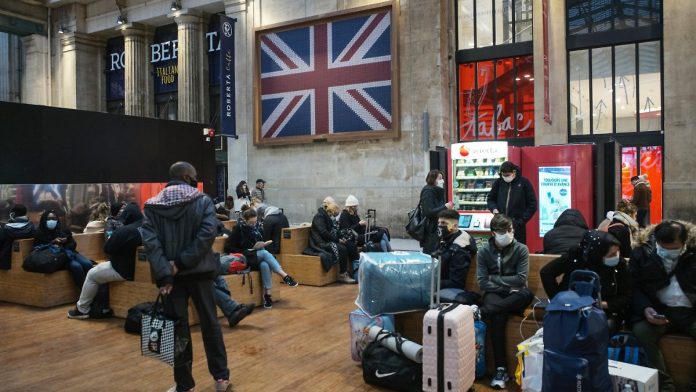 Many EU countries have locked themselves away from travelers from Great Britain since midnight. Precautionary measures against a corona mutation are currently providing an indication of the impending chaos Brexit. Although negotiations continue in Brussels, it is probably too late for an agreement.

Ten days before the end of the period of the Brexit transition, the possibility of disorganization exiting the European single market continues to grow. Negotiators from both sides continued to negotiate a trade deal in Brussels, but the EU parliament announced that timely ratification of a possible deal was no longer possible. Time is also running for provisional application of a possible agreement.

According to British Prime Minister Boris Johnson, no agreement is in sight. The situation was unchanged, Johnson told reporters in London: “There are problems.” However, Britain will do well without an agreement. The then applicable rules of the World Trade Organization (WTO) would be “more than satisfactory”. “We’ll definitely be fine.”

Around the same time in Paris, Clement Buené, the representative of the government responsible for the European Union, announced that there were still major differences on the issue of fisheries. The matter will be given a few hours, some more days. A French government spokesman had previously said that his country would cling to the “red lines” in the talks.

Great Britain left the European Union on 1 February, but the country would remain in the EU’s internal market and customs union until the end of the year. To avoid a departure with dire consequences for the economy, a trade agreement must be negotiated within this transition period. The talks have not progressed for months.

The deadline set by the European Union’s parliament for a finished text expired on Sunday evening. “It is impossible for Parliament to evaluate an agreement before the end of the year,” said the head of conservatives, CSU politician Manfred Weber. Bernad Lang, chairman of the trade committee from SPD, also emphasized that there would not be much ratification during the transition phase.

It would also be tough for a provisional agreement

Should an agreement still be reached in the coming days, it could possibly be in force for the time being and could only be confirmed later. However, time is running out for this as well: EU circles said that a provisional application of an agreement from January 1 would only be possible if an agreement was made by Christmas.

Even for the provisional entry of an agreement, a few days are required for legal examinations and translations. Despite everything, this provisional application is now classified as the most likely scenario, at least according to AFP information in the Parliament of the European Union.

SPD politician Lang said another extension of the transition period would be “the best”. But this is not considered very likely. Great Britain denied any postponement in the summer after Brexit was delayed several times for months.

Alternatively, there is the danger of a “no-deal” scenario, in which tariffs and other trade barriers on borders with the United Kingdom will become a reality from 1 January. Cut travel connections between Great Britain and the rest of Europe already provided a forest on Monday due to fears of the spread of a mutated version of the corona virus.

The deadlock negotiations between Brussels and London continued despite everything. British government circles were told Sunday evening that there were still “significant differences”. “But we will continue all the ways to an agreement.”

For months the main points of contention are fair competition, a future agreement for fishermen from the European Union and control of access to British waters. While significant progress was made recently on the first two sticking points, the question of fishing remained difficult until the end.