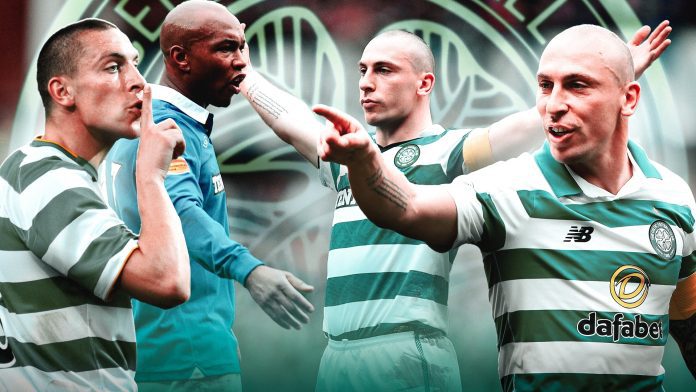 The story of one of the most popular players in Scotland and beyond: recently retired, he will coach in England with the usual leadership.

It’s 84′ at Pittodrie when Scott Brown takes the ball and is tackled rudely by two Aberdeen players: he protests the first interference, a sandwich well seasoned with kicks and cleats, gets up and passes to Sam Cosgrove, who passes him Surprised to see Sam standing still, he gives him one leg outstretched at knee height, causing him to fall a few meters while Shay Logan kicks the ball at him. Scotty rises, extends his arms and lets out a liberating scream somewhere between physical omnipotence and an adrenaline rush. the shirt is fixed Celtic and copies the four dance steps indicated. Four years later, again at Pittodrie, he played the last match of his career: 65 minutes against St Johnstone, wearing an armband. But not even a shadow of the hoops.

He said goodbye to Glasgow last season: a surprise departure after 15 years as absolute leader of a club that transcended football eras, paving the way for the faithful rebuilding of a career that ended in the most natural way Gone. Beginning of the coaching journey.

To better understand the man Scott Brown is, we must first start with the words of Peter Lovell, the CEO of Celtic, in the much-anticipated farewell note he used to greet his captain, titled “Captain”. leader. Legend ”, clear words.

Scottie’s last season as a player was not his best yet, but he has learned what he will need next year when he takes over as the team’s manager. Fleetwood Townin Football League 1. And here we need to pause for a moment to note the many, many visible changes in the life of one of the most talked-about (and used purely for speculative purposes) athletes of recent decades. Is.

The defined face, unlike Pittodrie’s reaction in that Aberdeen-Celtic 2018 encounter, hides a certain restraint this time: he is even more embarrassed in the first interview he gives as coach of the new Fishermen. He smiles and avoids the gaze of the reporter who is pressing him: it’s another Scott Brown in a nutshell. At Hampden Park in 2007, light years away from the challenger, a BBC reporter after one of the two semi-finals of the Tennant Cup, author of an endless string of questions about the previous week, in which then-players Hibernian (the team of which Brown was a was part of) meets with U.S. President Rod Petrie to complain about their coach, John Collins. A scene that cannot be laughed at. Brown answers all questions in a simple “donau” with a concise “I don’t know”: in short, I don’t see, I don’t hear, I don’t speak, with a fixed and provocative gaze.

Scottie, sitting in the Fleetwood locker room, on the other hand, is shy, oozing confidence: he smiles uneasily, with his back against the wall. He is a new man.

“I will make mistakes: this is my first job and it is a miracle if I don’t make mistakes”, he told the Blackpool Gazette.

It wasn’t always like this, Scott Brown. One of the most representative episodes of his career at Celtic is, of course, the one that followed the goal at Ibrox in February 2011 in the Cup Old Firm. An elusive left-footed Allan McGregor, who probably doesn’t look like anyone “Bruni” was expecting such a conclusion. He, who has always been “substance” before he was “technique”, left in the drawer at the time of his transfer from Hibernian to Celtic, along with the ambitions of a midfielder who, over time, could establish himself as a screen Found acting. in the middle of the field.

In any case, that goal will always be remembered for the associated celebration: Brown and El-Hadji Diouf savagely battered each other throughout the match. Who do you want to see by Celtic captain after the goal? The Senegalese striker, who is seen raising his arms to his face like “Brunie”, is complete with a serious and proud expression. The two will hug at the end of the game: because Scotty has always been like this. Enemy in the field, maximum respect off.

“I had a lot of fun”, he would tell Football Daily Clips years later. We take their word for it.

From a strictly statistical point of view, Scott Brown is one of three captains (ex-Celtic Billy McNeill claimed a streak from the 1965/66 to 1973/74 season, and ex-Rangers Richard Gough with a streak from the 1988 season) /89 to 1996/97) has won nine consecutive Scottish Championships with the same club. Overall, in terms of appearances, 611 with 46 goals for the Hoops.

The last case we’ll always want to remember pertains to the Old Firm, but it’s from March 2019: this time he faces not a quiet guy like Diouf, but “El Bufalo” Alfredo Morelos. There is certainly no one to turn back.

After half an hour in Paradise, the Rangers striker is sent off, but from home we have to wait for replays to justify the crowd’s shouts: Brown and Morelos away with the ball, Celtic captain behind passes him and “El Bufalo” he unmasks him. Or an elbow gesture: in short, just enough to knock him to the ground and trigger a red card.

Protest, controversy: certainly the ideal climate for the old firm. Bruni was treated and carried off the pitch, Morelos took a while to leave the pitch, Steven Gerrard was clearly annoyed but was used to such reactions from his forward. Brown, meanwhile, is at the height of a fourth man quenching his thirst: He waits for his opponent to come out and laugh in his face, knowing he has achieved his goal. The most important invisible man in Celtic’s recent history: the captain, the leader. fable.