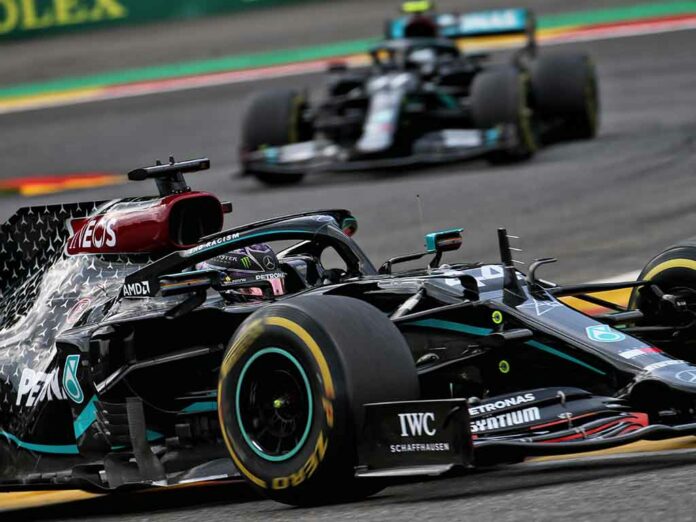 Familiar results…and some familiar scores after another procession at the Belgian Grand Prix after so much pre-race promise. Damn you rain clouds.

Check out all the driver ratings from Spa, courtesy of Late Braking.

Seven races. Five wins for Lewis Hamilton. The prospect of a title fight is becoming slimmer every race weekend and at Spa-Francorchamps Hamilton delivered yet another superbly managed race.

The one time Bottas did threaten to get within DRS range, Hamilton put together an epic middle sector to put the gap back up to close to two seconds and wasn’t threatened thereafter.

THIS TEAM ❤️ Thank you to everyone back home in Brackley and Brixworth that make days like these possible! pic.twitter.com/qPhlKK10Hi

After being soundly outqualified on Saturday, a change in fortunes was required on Sunday but once again Bottas ended the race as the second best performing Mercedes.

A decent start could not lead to a run down to Les Combes, nor could a Safety Car restart and chances outside of this were slim as Hamilton slowly but surely increased the lead. He did at least beat Verstappen to P2, reducing the gap between them to just three points.

In what is becoming a very common line to use, Verstappen proved to be the only resistance to the Mercedes duo on Sunday although on this occasion he was unable to finish ahead of either.

After defending from a threatening Ricciardo on Lap 1, Verstappen entered a lonely race. He was perhaps hoping for a tyre advantage similar to that seen at Silverstone but both teams seemed to struggle equally.

Renault entered the Belgian Grand Prix with a spring in their step and Ricciardo executed their pace with an impressive P4 finish after qualifying in the same spot.

Proving lightning quick through the first sector, Ricciardo was a menace on Lap 1 before inevitably losing ground to the top three.

A beautifully managed second stint saw him maintain pace until the end of the Grand Prix, not only did this result in a fastest lap bonus point, he finished within a few seconds of Verstappen in front who was forced to heavily manage his tyres.

So how ’bout stealing the Fastest Lap right at the end, @danielricciardo?

And a P4 finish as well for a happy Honey Badger #BelgianGP 🇧🇪 #F1 pic.twitter.com/o4EmCCcTnr

See also  COP26 results: these are the resolutions of the climate summit in Glasgow

Rating Ocon’s race is a tough one, P5 equals his best ever finish in Formula 1 and the first time he’s finished this high in a race since the 2017 Mexican Grand Prix but it was a big gap between himself and his team-mate. Just one spot in it, but over 21 seconds.

This was likely not helped by the double stacking at his pit stop causing him to lose a position to Albon. He remained stuck behind him for a few laps towards the end of the race before making a clinical move into Les Combes on the final lap.

There were encouraging signs for Albon during the race weekend, namely strong performances throughout the first few stages in qualifying but the end result was much the same, 26 seconds separating himself and his team-mate.

The decision to go on to medium tyres went against the grain and left him vulnerable towards the end of the race, he was able to keep Norris behind but Ocon took P5 on the final lap. Ironically, it was Albon who took P5 on the final lap at the 2019 Belgian Grand Prix but he’ll have to settle for one position lower this time around.

The first half of Lando Norris’ race was somewhat anonymous as he dropped out of the top 10 but a brilliant stint on the Hard tyres brought him back into contention and allowed him to pick up valuable points.

Norris, the only McLaren in the race, was able to pass Lance Stroll as he struggled with tyre wear and caught up to the battle over P5. For a time it seemed as if ‘Last Lap Lando’ would make another appearance but a chance didn’t quite present itself.

A P8 finish and a Driver of the Day award 🙌

Amazing job from Pierre Gasly on what was a very difficult weekend at Spa.#BelgianGP 🇧🇪 #F1 pic.twitter.com/P3slMNKOnA

Considering his strategy, the Safety Car came out at completely the wrong time for Pierre Gasly, allowing everyone else bar Sergio Perez to take a cheap pit stop. Undeterred, Gasly made overtake after overtake on the medium tyres as he soared back into the points.

Taking the vote for Driver of the Day, Gasly’s crowning moment was an epic move into Eau Rouge and Raidillon. An appropriately brilliant move given the death of his close friend Anthoine Hubert at the circuit one year prior. As far as tributes go, Gasly’s could hardly have been any more fitting.

Racing Point will likely be disappointed by their afternoon’s work with Stroll leading home the pink cars in P9.

It looked like Stroll would finish a few positions higher but his tyre management in his second stint was weak and his pace fell off a cliff for the final laps.

When the Safety Car made an appearance early in the race, everyone took the opportunity to fit new tyres. Gasly was an understandable exception to this given his starting tyre but Perez was also left out on old soft tyres.

Perez made the tyres last an admirable length of time and he made overtakes to get back in the points but he was capable of more. Double stacking in the pits isn’t ideal but was preferable to the strategy put forward here.

While his team-mate takes a lot of plaudits coming out the Grand Prix, Kvyat was unable to finish in the points and is now staring at a 2-18 points deficit to his team-mate in the championship.

Starting in P11 on fresh medium tyres, Kvyat might have fancied his chances against soft runners in the top 10 but he could make no progress compared to his team-mate.

A four time winner at Spa, Raikkonen proved his credentials at the circuit with a solid drive to P12 that threatened a point or two for a while.

Raikkonen managed to get past both Ferrari drivers in the race and did a good job of keeping Kvyat close. It might not mean much to the Finn but being the leading Ferrari-powered car is impressive.

Vettel’s feeling towards leaving the Scuderia might well be turning into relief given the hard time Ferrari has had during the 2020 season but, at Spa, Ferrari reached a new level of embarrassment.

P13 and 14 in qualifying, ditto in the race, with the car visibly slow on the Kemmel Straight. Vettel will want the bleeding to stop but with Monza coming up, it’s hard to see it happening.

See also  "I am dishonest because I have strong enemies"

Trying a two-stop race presented Leclerc with something different from his team-mate but the net result was almost identical, finishing just behind Vettel in P14.

It was a great start by Leclerc to surge into the top 10 but the lack of straight line speed saw him drop like a stone thereafter.

Grosjean seemed to have the edge on Magnussen throughout qualifying and the race although that’s little consolation given how poor the Haas was.

Latifi elected to two stop, which elevated him ahead of Magnussen, but it had little effect other than that.

A poor qualifying performance compared to his team-mate was damning and Latifi needs a good performance soon to show Williams what he can do.

Last in qualifying, last on track in the race. All in all, not a weekend Magnussen will want to be reminded of.

He did at east get a strong start, moving up a number of spots on the opening lap but the jubilation was short lived as he steadily moved backwards.

That was scary. Thank goodness both Antonio Giovinazzi and George Russell are ok.#BelgianGP 🇧🇪 #F1pic.twitter.com/GGe9fQBWCd

On the same day that two Ferrari academy drivers finished 1-2 in the F2 sprint race, Giovinazzi made a rookie error to put his car in the wall. Not a good look with a decision still to be made.

He can take one positive away, and that is he was clear of Raikkonen and other rivals prior to this happening but it means little when you crash on your own accord.

An early exit from the GP for Russell as he was the unfortunate car caught up in the Giovinazzi incident. In an attempt to dodge the Alfa Romeo, he hit the dislodged wheel of Giovinazzi’s car bringing a premature end to his race.

The Belgian Grand Prix driver ratings are brought to you by the good folks at Late Braking. You can check them out in the following places: