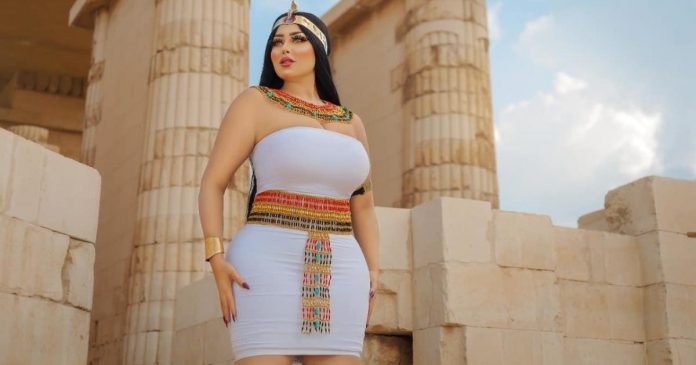 Cairo – Egyptian model Salma al-Shimi was arrested on Monday during a photo session at the famous archeological site of Saqqara in the city of Giza. Al-Shimi, 26, posed for a collection of photos in an ancient Egyptian costume modeling dress. The decor was considered “inappropriate” by officials from the Ministry of Tourism and Antiquities.

Mustafa Waziri, secretary general of the Supreme Council of Antiquities, confirmed the incident to government prosecutors for investigation, the ministry said in a statement. It warns the vizier that “negligence will be punished when it comes to antiques or our unique Egyptian culture.”

Two ministry employees and four security personnel working at the site were referred to prosecutors for an administrative investigation, Sabri Farag, director of the Sakkara antiquities site, told CBS News. Farage denied reports that six such individuals had been arrested.

Anyone wishing to shoot a photo or video for commercial purposes at one of the archeological sites in Egypt must obtain the permission of the Ministry.

Al-Shimina’s photographer, Hosam Muhammad, 22, told a local newspaper that he and his subject had reached an “agreement” with staff at the site to shoot photos around the Pyramids of Johor for about 15 minutes. The pyramids date to the 27th century BC.

Al-Shammi identified herself as Queen “Malban-Titi” for the photo shoot, a name that referred to the sweet feast of Turkey’s happiness, “Malban” and the ancient Egyptian queen Nefertiti.

The photos went viral and sparked a heated debate about the difference between breaking social norms and breaking the law.

A lawyer accused al-Shimi of being “a perversion of culture and an insult to the great Pharaonic history.” An Egyptian lawmaker has called on al-Shimi to face “severe punishment.”

Under the Egyptian justice system, anyone can file a lawsuit against anyone for any reason, but it is up to the public prosecutor to determine whether there is a qualified lawyer and then bring formal formal charges.

Hyperbole aside, prosecutors on Tuesday evening ordered both al-Shimi and his photographer released on the remaining 500LE (approximately $ 32) bail for a full investigation. According to local newspapers they are facing formal formal charges of photography without a permit, but no charges related to anything arising out of claims of incompetence or incompetence.

Mohammed told the local press that he was shocked by the overwhelming response, insisting he had done nothing wrong and was just trying to make a living. He said he was paid 1000LE (approximately (65)) for the shoot, and if he had known he would turn into such a scam, he would have turned down the job.

He also said that he believes that none of this would have happened if the body type of the model involved had been different.

Despite outrage from some quarters, other Egyptians rallied to defend al-Shimin’s right to wear what he wanted and criticized the tourism ministry’s actions, suggesting that legal action would only bring bad publicity to Egypt.

It was Sakkara just two weeks ago In the news A landmark of about 100 sealed coffins containing mummified corpses for archaeological discovery.