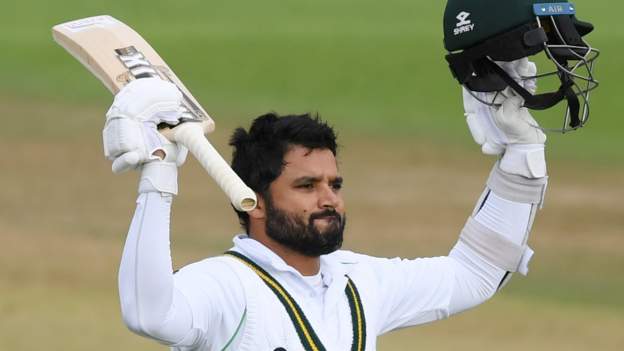 England forced Pakistan to follow on on day three of the final Test at the Ageas Bowl despite a defiant century by visiting captain Azhar Ali.

Azhar’s controlled 141 not out dragged his side from 75-5 and the point of implosion in reply to England 583-8 declared.

He shared a sixth-wicket partnership of 138 with wicketkeeper Mohammad Rizwan, who battled to 53.

After Rizwan was removed by Chris Woakes, England could have run through the tail had it not been for an incredible passage of play that saw three catches dropped in the space of 10 James Anderson deliveries.

Anderson eventually had last man Naseem Shah caught at third slip to complete figures of 5-56 and move to 598 Test wickets.

With Pakistan 273 all out, 310 behind, they were given half an hour to bat again in the evening gloom, and Azhar promoted himself to open.

However, just as the players returned for the start of the Pakistan second innings, the umpires decided the light was not good enough to resume.

With rain forecast for Tuesday, there may be added pressure on England to wrap up victory on day four in order to seal a 2-0 series win.

England made to work hard

With such a massive total on the board and Anderson charging towards 600 Test wickets, England seemed primed for a rush towards victory in a rain-interrupted morning session.

However, it is to the credit of Azhar and Rizwan that Pakistan dug in and made the home side work hard.

On a slow, flat pitch, England had to cycle through their options, particularly when the ball got soft.

Jofra Archer bowled as quickly as he has since last summer’s Ashes and Dom Bess found turn, but there was a period in the afternoon when batting was comfortable.

It was at that time that England could have used the inspiration of a crowd, or the magic of the absent Ben Stokes.

Still, they were only ever one breakthrough away from Pakistan’s long tail, and it was their poor catching that delayed the inevitable.

Azhar has struggled with the bat since being appointed captain at the end of last year, part of a wider lean run that had seen him pass 40 only once in his previous 18 innings.

This, though, was a determined return to form, produced when Pakistan were in huge trouble and celebrated joyfully by his team-mates.

Circumspect at first, he gradually found fluency. Azhar scored only 29 runs from his first 112 balls, then 74 from his next 93. He was strong square on the wicket on both sides.

The combative Rizwan, who took a nasty blow to the helmet from Archer, provided doughty support in the largest partnership made against England this summer.

However, when Rizwan tickled Woakes down the leg side to be caught by diving wicketkeeper Jos Buttler, the lower order was exposed to the second new ball.

Even then, Azhar managed to drag 60 more runs out of the last four wickets, with the skipper benefitting from two of England’s drops and remaining unbeaten.

With Pakistan resuming on 24-3 and Asad Shafiq tentatively poking Anderson’s sixth ball of the day to Joe Root at first slip, it seemed set to be a straightforward day for England, especially after Bess’ ripping off-break took the edge of Fawad Alam.

That was the first of three excellent catches by Buttler, whose keeping had previously been under fire, the best of which was a flying grab down the leg side to hold Shaheen Afridi off Stuart Broad.

In Anderson’s next over, a comical passage of play saw Broad put down the simplest catch off Azhar at mid-on, only to angrily hurl the ball at the striker’s end, hit the stumps direct and run out the dawdling Abbas.

When the innings was finally wrapped up, there would still have been time for Anderson to attempt to reach his next milestone, only for the bizarre sight of the players being sent back to the dressing rooms before they could get to the middle.

Pakistan, when they lost the early wicket this morning, many of us thought they would fall in a heap, but then Azhar Ali came out.

He played some glorious shots, and in Mohammad Rizwan they have found a fighter, a character. That partnership was special.

I just hope James Anderson can grab a couple tomorrow and go home with some positivity of thought in his mind.

See also  He Heals from Covid, a Touching Letter of Thanks to Health Professionals