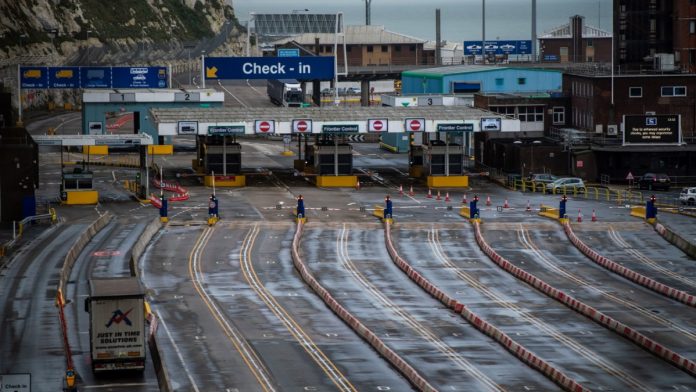 Manston International Airport is 30 kilometers from the port of Dover. There, on the runway of the airport, they are now standing and waiting – all the trucks that want to go from England to France. It is hard to say exactly how many there are, but one thing is certain: Since the beginning of the week there have been more and more, a good thousand trucks were talked about on Tuesday. They have been stranded in the UK since midnight on Sunday after stopping traffic on the French English Channel. The reason for this is the fear of a new mutation in the coronavirus appearing in the South East of England.

On Monday evening, Boris Johnson was still full of hope that the blockade on the English Channel could be resolved within hours. He had “excellent talks” with French President Emmanuel Macron and is therefore convinced, the British Prime Minister said in a press conference. But it did not go as fast as Johnson thought. It was not until the European Commission proposed a broad regulation of the European Union on Tuesday afternoon that London again had something resembling trust.

According to this, freight movement to and from Great Britain in particular has to be maintained. And according to the same principle that was used during the first corona wave in the spring after uncontrolled boundary closing. There should be no quarantine for truck drivers, and only testing obligations if it does not affect freight.

Passengers should be able to return home if they take a corona test or go into quarantine and resume train or flight connections that have been stopped due to the virus. Around 40 countries around the world had banned aircraft from Great Britain from landing.

There is huge anger against the French government in London

For Johnson, the main concern on Tuesday was to ensure food supplies in his country. Right now, before the Christmas holidays, the Prime Minister wants to prevent the British from going without fresh fruits and vegetables. If you believe that there is a large supermarket chain in the UK, at least the supply of champagne should be guaranteed. Whether this also applies on New Year’s Eve, if there should be no exemption by then, cannot be detected earlier.

Either way, there is a lot of anger against the French government in London. Downing Street did not expect Macron to completely block traffic on the English Channel. In the government district, there was speculation behind closed doors, that Macron wanted to use it to create pressure in the Brexit negotiations. The main point of discussion in future relations is a final major point of contention: quotas for EU fishermen in British waters.

France is taking an intrusive role from the European Union in the Brexit negotiations. It is less about economic than a symbolic and political struggle. The Parisian government refrains from starting the new year with pictures of fishermen demonstrations in Brittany.

It may have been a coincidence, but less than 24 hours after Macron blocked the canal route, a proposal arrived from London that gave new impetus to the stalled negotiations. It was said to the European Union circles that the British are now ready to gradually reduce the fishing rights of the EU fishermen by more than a third over a period of five years. Over the weekend, London asked for 60 per cent. On the other hand, the European Union is set to cut only 25 percent, as it became known on Tuesday. According to EU diplomats, Brussels is ready to continue negotiations in the new year if necessary.

In London it was stated only that the positions were still mixed, despite being “very different”. Like Macron, Johnson cannot come to a deal that turns local fishermen against him. For Johnson, it is about the core promise of Brexit: achieving sovereignty. As an independent coastal state, the UK wants to achieve full control of its waters.

Even on the other side of the canal, the present is all about the fish. First, in particular, of the concern that the French would have to recreate the Christmas menu if salmon from Scotland did not make it into the country. Special toast is already available in supermarkets, especially for the party round instead of square, but the toppings may be less. French supermarket giant Sistem U warned on Tuesday of a “shortage for fish and seafood on 23 and 24 December”.

In Kailas, where 90 percent of freight traffic between the EU and Great Britain is processed, trucks have already become more jammed than usual since November. This was not only due to the Christmas business coming to a close, but also because British companies started buying hamsters shortly before Brexit.

Now the movement of goods has come not only towards the British, but also towards France. Shipping companies no longer want to send their truck drivers across the canal if it is not clear when and how they can return.

The French government initially remained silent on Tuesday. Johnny Palace did not comment on the conversation between Johnson and Macron. The French President has contracted the corona virus and is in isolation. Published on Tuesday L’Express A lengthy interview with Macron in which the president focuses on philosophizing about the identity of the French nation. Macron left a solid border struggle for his ministers.

At lunchtime on Tuesday, news channel Francinfo reported that the French could enter from Great Britain if they could show a negative corona-PCR test. This also applies to truck drivers. The border will remain closed to British private individuals.

The Secretary of State for European Affairs, Clement Beaune, said in an interview on Monday that in order to be “able to better coordinate at the European level”, the border, including goods, had to be closed for 48 hours. On the question of Brexit, Buenay wrote on Twitter that the government was preparing for “all scenarios, deal or no deal”.