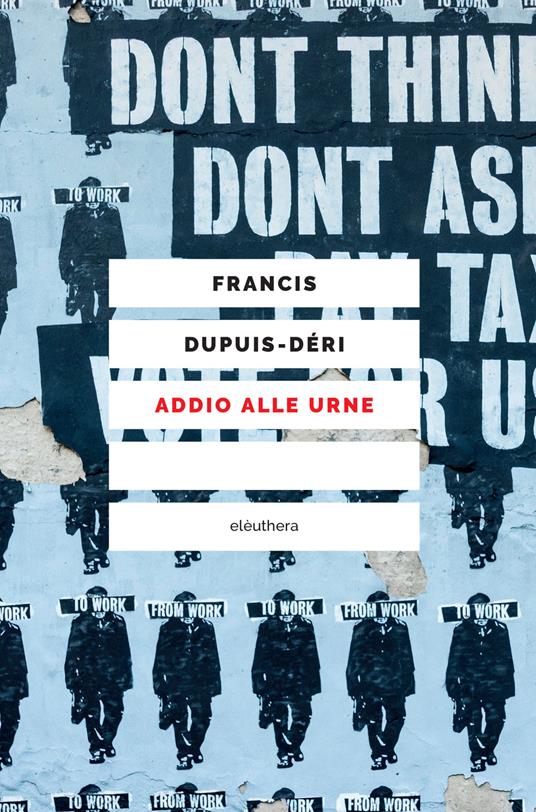 This is the summary – reported on the back cover – of the essay “Farewell to the Election” – recently published by Eleuthera in Italy – by Francis Dupuis-Derry, Canadian, teacher in the Political Science Department of the University of Quebec. in Montreal and a former researcher at the Massachusetts Institute of Technology in Boston.

Dupuis-Derry, recalls how, in both the United States and France, both came out of the bourgeois revolutions of the eighteenth century, the respective founding fathers never claimed to have established a democracy, because they did not want it at all. The people concerned could rule themselves directly, as was the case in antiquity in Athens.

,His model was Rome, not Athens.” – writes Dupuis-Derry – “With the absence of its Senate, elections and popular assemblies”,

Dupuis-Derry points out, in particular, that already in ancient Rome, the statesman Quinto Tullio Cicero told candidates in his “election campaign handbook” – that voters preferred “Lies on your part instead of denial” is that “It is imperative to know the names of voters, to flatter them, to come frequently, to be generous, to care for one’s reputation, and to instill a strong hope for the way public affairs will be conducted.”,

In this sense, Dupuis-Derry explains, “The myth of representation of the people or nation is deeply undemocratic, as it serves to validate the power exercised by parliamentarians over their fellow citizens, leading them to believe that they are acting in their name and for their benefit. are”,

In fact, as stated in Dupuis-Derry’s essay “The electoral system favors an increase in the power of ambitious and up-and-coming individuals on the front of progressive parties and on the front of conservative and reactionary parties”.

See also  Bologna in search of a true identity

Dupuis-Derry recalls the portrait of the Scottish revolutionary and philosopher John Oswald (1730 – 1793), who served in the British army in India and later joined the revolutionaries in France, where he participated in the famous occupation. He died in defense of the Bastille and the Revolution, as well as being a friend of American Revolution hero Thomas Paine.

According to what Oswald, Dupuis-Derry told us in “The Farewell to Elections”, we found the theory of political representation ridiculous and expressed his idea in the short essay “Le Goverment du People”.

In it Oswald wrote, among other things: “I confess that I have never been able to think of a representative system without being surprised by the credibility, I would say almost, of the absurdity with which the human mind takes the most obvious absurdity. must piss by, he will be branded as a fool: yet a pseudo-idea is an idea that is received not only with surprise, but also with enthusiasm”.

Oswald therefore proposed “A system free from parliamentarism and made up of a plurality of decision-making spaces at the local level, where people can gather and deliberate in popular assemblies”, And, the author continues: “For decisions requiring large-scale coordination, he proposed a federal system whereby local legislatures could send spokesmen to advise and inform other legislatures, who would then report them to their local legislatures, and so on. Like.” ,

Thus, in essence, spokesmen would not have decision-making power over local assemblies, which would instead retain all powers, including the removal of spokesmen.

In particular, Dupuis-Derry’s essay points out that so-called “parliamentary democracies” or “representatives” were created in the Middle Ages and that kings, and certainly not representatives of the popular classes, designed parliaments.

See also  Salute to the Venetian industrialists who supported motherhood

Initially, in fact, these were occasional gatherings in which the king gathered “the nobles of the kingdom” to implement the new taxes. Parliament, initially, was a kind of meeting of the nobles in the court of the king. Over the centuries, such gatherings became an opportunity for the nobles to voice their grievances to the sovereign and ask for claims.

Only with the French Revolution would we reach the parliamentary system as we know it, but even there, there was always the restricted elite to command, that was women and representatives of the so-called Fourth Estate, or the poorest and most proletariat. was completely excluded. region.

Francis Dupuis-Derry’s essay, a genuine historical excursion on electoralism and the need to overcome it, to arrive at authentic and direct democracy, is very interesting, also because it is a critique of those who care about criticism. without, often remain active, which many citizens have been implementing for some time. As they would like to self-represent and self-manage, as the essence of democracy seeks.

In this sense, the findings of Moreno Mancosu, a researcher in political sociology at the University of Turin, in particular an analyst of electoral behavior, are also very interesting.

For example, Mancosu, analyzing the 2018 Italian political elections, in which nearly 34 million citizens voted, assumes that the weight of each vote, or the ability to transfer the effective percentage of the parties, corresponds to 0.000029%. eats. Literally nothing, in short.

Francis Dupuis-Derry concludes his essay by explaining how, instead of wasting energy in electoral processes, it would be more useful and rational to channel them “Towards communities, popular mobilization and social movements, to work on building societies that truly embody freedom, equality, solidarity and mutual assistance., through a process that looks “The field of (direct) democracy and self-management”.

See also  "It's up to us": Boris Johnson wants to celebrate Brexit trade deal - politics

Furthermore, the two proponents of popular democracy and socialism, as well as the founders of the First Workers’ International of 1864, namely Karl Marx and Michael Bakunin, although very different from each other, were very similar on the field.

In fact, Marx said: “The oppressed are allowed once every few years to decide which representative of the ruling class will represent them in Parliament and oppress them!”,

On the other hand, the anarchist Bakunin wrote quite similar things, namely “Representative democracy—a form of state, founded on perceived sovereignty, brings together the two main conditions necessary for a perceived will of the people, which must be expressed by self-appointed representatives of the people in legislatures defined as popular His progress: the centralization of the state and the genuine surrender of the sovereign to the intellectual minority ruling it, who claims to represent it and who exploits it infallibly”.