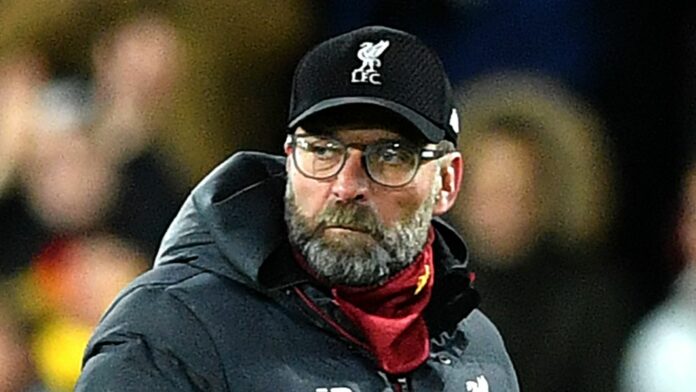 Follow Arsenal vs Liverpool in the Community Shield on skysports.com and the Sky Sports app with our live blog; kick-off 4.30pm, Saturday

Jurgen Klopp claims the best way for Liverpool to defend their Premier League title is to attack the next one.

Liverpool ended a 30-year wait for the title last season after an outstanding campaign in which they clocked up 32 wins and 99 points.

Topping that would be a remarkable achievement but Klopp feels that is the aim his players must have.

He feels they showed that mentality last year after accumulating 97 points and winning the Champions League in 2018-19 and he wants to see the same again.

“We will not try to defend it, we will try to attack the next one,” said the German, whose side launch their new campaign against FA Cup winners Arsenal in the Community Shield on Saturday.

“That’s the truth, you don’t change your approach. That is what we always did and there is no reason for changing it.

“Motivation will not be our problem. I know this team will not stop trying.

“I don’t expect everything to happen for me, I never expected it, but I expect I will give absolutely everything and I expect the boys to do that as well.”

Liverpool will have to deal with the tag of being champions, which could provide opponents with extra motivation, but Klopp feels he is well used to dealing with that anyway.

He said: “When I came here I was really surprised how much a game against Liverpool means to other teams, even when we were not considered as Liverpool of the past, like seventh or eighth in the league.

“When we arrived at the stadium I thought, ‘Wow, they really have a proper go for it’.

“That has never changed, so I am not sure we can have a bigger target on our back than we already had last season.

“Everybody wanted to beat us, obviously, for a good reason. [Although] not so many could do it, I don’t think that will change.

“If we think because we are champions they want to beat us even more, then we have already lost a few per cent of our approach, mood, attitude and all that stuff. I am not ready for that.”

The season has a disjointed start for Liverpool, beginning only five weeks after they wrapped up their last campaign.

They have been back in training just a fortnight and, after the Community Shield, their preparations will be further disrupted by the loss of a number of players due to international duty.

In light of the current situation regarding the coronavirus and international travel, Klopp admits he is concerned, even if fully trusting of national associations.

He said: “I don’t want to use the word worried and see this in a headline. I know everybody tries their best to keep the boys safe but if a 16-year-old goes – a first time out – even when it is a good guy you are slightly concerned.

“I would like to keep them here, not for training, just because we know what we do but I am really sure all the FAs will try to make sure the boys are in a safe place.”

Klopp has ruled out Liverpool signing Lionel Messi this summer, but admits the Barcelona forward would prove a “great” addition for the Premier League should he move to an English club.

Messi has told Barcelona he wants to exercise a clause in his contract, allowing him to leave for free with immediate effect, but the La Liga club believe it has expired and the player is contracted until 2021 with a £626m (€700m) release clause.

Asked whether Liverpool would like to sign the Argentina international, Klopp replied: “Interest? Who doesn’t want to have Messi in their team? But no chance. The numbers are absolutely not for us. But good player, to be honest!”

All the latest news, analysis and rumours from the window in one place.

The summer transfer window will run for 10 weeks from July 27 and close at 11pm on October 5.

A domestic-only window for trades between the Premier League and EFL then runs from October 5 and closes on Friday October 16 at 5pm. Follow all the news and analysis on Sky Sports News and across Sky Sports’ digital platforms, including with our dedicated Transfer Centre blog.

Sky Sports Fantasy Football is back!

Another year, another £50,000 jackpot on the line. Sky Sports Fantasy Football makes its return for the 2020/21 season.

See also  United Kingdom: On May 6, towards the vote. Curtis (U. Strathclyde) to SIR, potential referendum for Scotland's independence