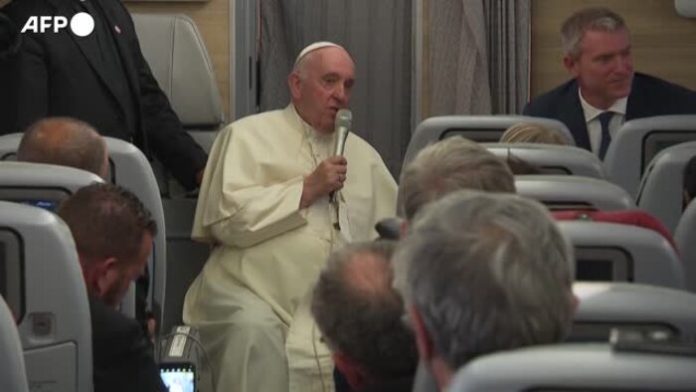 Pope Francis returns to Italy from his apostolic visit to Canada. Pope’s plane coming from Iqaluit landed at Rome-Fiumicino airport. But on the return flight he appealed to political forces in the wake of the vote: We need “responsibility, civic responsibility.” “First of all I do not want to get involved in Italian internal politics”, said Francesco when asked about Draghi’s downfall. “Second, one cannot say that President Draghi was not a man of high international quality. He was the president of the bank, a good career, so to speak. But then, I asked only one question to one of my colleagues. Tell me: How many governments did Italy have in this century? He said to me: Twenty. This is my answer”. And of his future he sees: “I don’t think I can go at the same pace as I used to. I believe that at my age and with this limitation I need to be able to serve the church.” Will have to save a little. That aside. It’s not a disaster, no. You can change the pope. You can change, no problem”, he observes.

Pope: ‘I could think of a possibility to step aside’

“If I ever thought of retiring? The door is open. It’s one of the common choices. But to date I haven’t knocked on that door. I haven’t heard of that possibility. But maybe it means it.” Not that the day after tomorrow I start thinking about it. But this time, honestly, no.” “Even this trip was a test – underlines Francesco – it is true that one cannot travel in this state. I would probably have to change the style a bit, less so, of those trips. The debt has to be paid which I still have to do. But it is the Lord who will say, The door is open, it is the truth.” “I guess I have to limit myself a little bit with these efforts – the pontiff reiterated – knee surgery does not work. In my case the technician says yes, but there is a problem with the anesthesia that I had 10 months ago, six Hours of anesthesia. And there are still scars. You don’t play games, you don’t mess with anesthesia, and so you think it’s not entirely convenient”. “But I will try to continue to travel and be close to people, because I believe it is a way to serve. Closeness. But I don’t want to say more than that. Let’s hope”. “Yes, I could back off – says the pontiff, answering another question – it’s a business: the Lord can say. The Jesuit tries to do the Lord’s will. The Jesuit pops up to do the same. When the Lord speaks, if the Lord tells you, go ahead; if the Lord tells you to go to the corner, go to the corner; but the command is the Lord. The Lord who commands.” But about possible trips that he could still make, he explains: “I said I wanted to go to Ukraine, now let’s see what I get when I get home. Right now I want to go to Kazakhstan. This It’s a quiet trip, without much hustle and bustle. The moment is everything. I have to go to South Sudan before the Congo too, because it’s a trip with the Archbishop of Canterbury and the Bishop of the Church of Scotland, all three together, the three of us Made retreat two years ago. Then Congo, it will be next year, because the rainy season, we hope. I have all the good wishes, but let’s see what the foot says”.

See also  Almonds against sturgeon (and freedom moves away) - Corriere.it