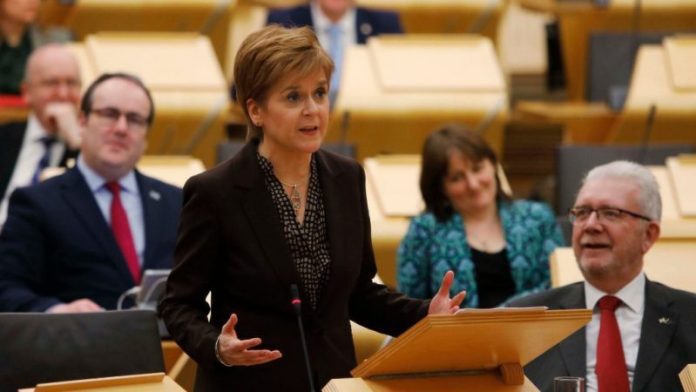 Scottish Prime Minister Nicola Sturgeon announced on Tuesday 28 June that she plans to hold a second independence referendum in October next year, promising to take legal action to secure the vote if the British government tries to block it. .

Sturgeon spoke as Edinburgh’s semi-autonomous government, led by his Scottish National (Independence) party, released a bill outlining plans for a vote to be held on October 19, 2023.

The prime minister said he would write to British Prime Minister Boris Johnson to obtain permission to hold an advisory referendum, but has begun plans to gain legal authority if London attempts to block the initiative.

“The question of freedom cannot be suppressed. It should be resolved democratically. And this must be done through an irreversible and trustworthy process,” Sturgeon told MEPs in the Scottish Parliament.

“What I am unwilling to do, which I will never do, is allow Scottish democracy to be a prisoner of Boris Johnson or any prime minister,” she said: “Now is the time – at this crucial moment in history – To discuss and decide the future of the country. Now is the time to put Scotland on the right path, which the people who live here have chosen. Now is the time for independence.”

Voters in Scotland, which has a population of around 5.5 million, rejected independence in a 2014 referendum, when ‘no’ won 55% of the vote. But the semi-autonomous government claims that Britain’s exit from the European Union, which was opposed by most Scots, means that on the question of independence, the word should be given back to the citizens.

Independence parties won a majority in last year’s elections and Sturgeon, under pressure from some members of his own party, promised to call a referendum by the end of 2023.

Johnson and his Conservative Party, ruling London and the opposition in Scotland, strongly opposed the referendum, saying the matter was resolved in 2014.

Currently, polls are variable: some show the same percentage as eight years ago, others narrow the gap, and more generally a vote that will be decided over the wire.

Johnson had previously refused to issue a ‘Section 30’ ordinance that empowers the Scottish Parliament to hold a referendum, and said on Tuesday 28 June that Britain’s top priority is the economic pressure the country is facing.

His spokesman then reiterated that the government believes this is not the time to discuss a new referendum.

Sturgeon said the legality of the referendum without the UK government’s permission is being challenged by the Edinburgh government, and has already asked the Scottish High Law Officer Lord Advocate to bring the matter to the UK Supreme Court.

The Scottish government does not have the legal authority to hold a referendum in London without the consent of the referendum. Sturgeon then proposed a consultative and illegally binding referendum, in the hope that it would make it more difficult for a court to declare it illegal.

The high court said that once the documents are sent to its chairman, it will decide whether there are any preliminary issues that have to be addressed and when the matter will be heard.

“At this stage, we cannot confirm when the matter will be discussed,” it said in a statement.

Should the court find that the Scottish Parliament cannot hold an independence referendum without the consent of the British Prime Minister, Sturgeon said the SNP’s platform would be based on the demand for independence in the upcoming general election, allowing them to really Referendum on Scotland’s stay in Britain.