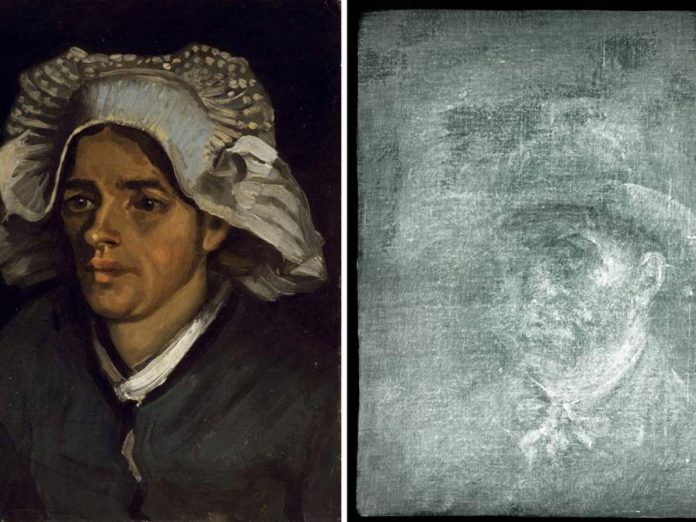 Some have literally disappeared into thin air, others remain a mystery, others attributed to their authorship only in recent times. In short, Vincent van Gogh’s paintings are not only priceless masterpieces, but also often attract attention for the stories they hide. This is the case of the famous Dutch painter’s painting “Head of a Peasant” in 1885. During a routine X-ray examination, experts from the National Gallery of Scotland in Edinburgh realized that this oil was hidden in reverse. Another painting. Indeed, a self-portrait of Van Gogh remains unknown to this day.

The image, which only X-rays have allowed to be revealed, shows the artist’s somewhat blurry and black-and-white face with a wide-brimmed hat and a large handkerchief around his neck. Behind another is a painting, hidden among the masterpieces of the British exhibition space for more than half a century and found some 130 years after its creation. Scottish researchers immediately spoke of an “incredibly rare” find, explaining that it was “absolutely thrilling” to find this self-portrait whose existence no one suspected until a few days ago.

Speaking on behalf of his colleagues, Leslie Stevenson, Edimbugo Museum’s senior painting conservator, owns three Van Gogh paintings. tells. In addition, in order to save money, the great Dutch artists often reused canvases. A spokesperson for the museum says, “Except that instead of repainting the previous works, they changed the picture and worked on the reverse.” The same thing would have happened in this case as well. Except that in the early 20th century the main painting, “The Head of a Peasant”, was sent to Paris to be displayed in a major exhibition. And so, perhaps to give the canvas more thickness, the craftsmen who had to frame it decided to line it with a layer of cardboard glued to the back, supported by abundant glue. With the result that the painter’s self-portrait, which was in all likelihood painted a few years later, was lost.

National Gallery experts are now evaluating the possibility of detecting the hidden painting as well. It’s anything but simple: « The process of removing the glue and cardboard will require a delicate conservation work. We are trying to figure out how to do it without damaging the farmer’s head ». So, at this point in time, we should be content to read the image hidden inside the lightbox to be placed at the center of the exhibition, scheduled from July 30 to November 13. The X-ray image shows a man with a beard and a brimmed hat, a handkerchief tied around his neck that may also have been a bow tie. This pose is similar to that of other van Gogh self-portraits, in which the subject’s eye appears to stare directly at the viewer, the right side of the face in shadow, the left ear highlighted. Once discovered, the hidden masterpiece would become part of a larger group of self-portraits and other works painted by van Gogh behind other canvases. Five can be seen at the Van Gogh Museum in Amsterdam, others at the Met in New York and the Wadsworth Atheneum Museum of Art in Hartford, Connecticut.