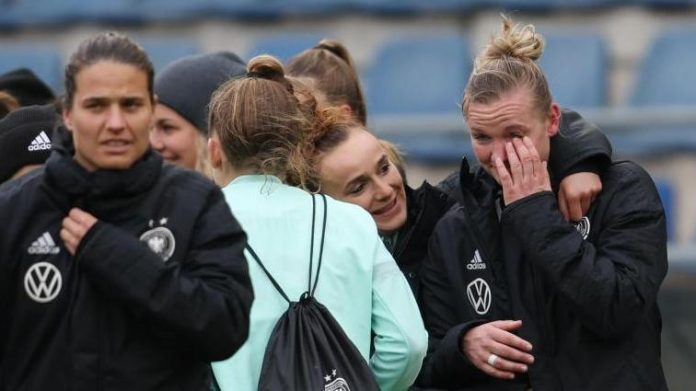 After an emotional return to the German women’s football team, Alexandra Pope lost her cool.

“You rarely see me cry, but at that moment the tears really fell,” said the captain, as she reappeared and turned mint green at the press conference in Bielefeld about the moments after the final whistle. Sitting in dress The 31-year-old’s return from VfL Wolfsburg after a one-year forced break due to a serious knee injury eclipsed DFB Selection’s 3–0 (1–0) win against Portugal.

Pope also watched “a good game by my team” in front of 7,364 spectators. Her club colleagues Lena Oberndorf (40th) and Felicitas Rauch (80th) as well as FC Bayern Munich (55th)’s Klara Buhl scored for Australia/New Zealand in their seventh win in the 2023 World Cup Qualifier. In Serbia on Tuesday (16:12:00), the two-time world champion can book World Cup tickets ahead of time.

After her 112th international match, Pope is now focusing on preparing for the European Championships in England in July. The title there is his big goal. “It’s great that Poppy is back,” national coach Martina Vos-Tecklenburg said. “There is no doubt that Poppy worked very hard to make this comeback. And she also knows that she will have to work very hard in the weeks and months to come. She will do it.”

When the 2016 Olympic champion came in in the 59th minute, Pope said he was still very comfortable. “But when I saw Sweeney handing over the captain’s armband, which I didn’t expect at the moment, it made me a little ripped at first — I don’t want to say —” she later said of Svenja Huth’s scene.

In the end, almost all German players and observers embraced the two-time “Soccer Player of the Year”. “After the last whistle, yeah, to be honest, I was so overwhelmed,” she said. “It was a moment where I thought: Now I’ve really made it back on the pitch.”