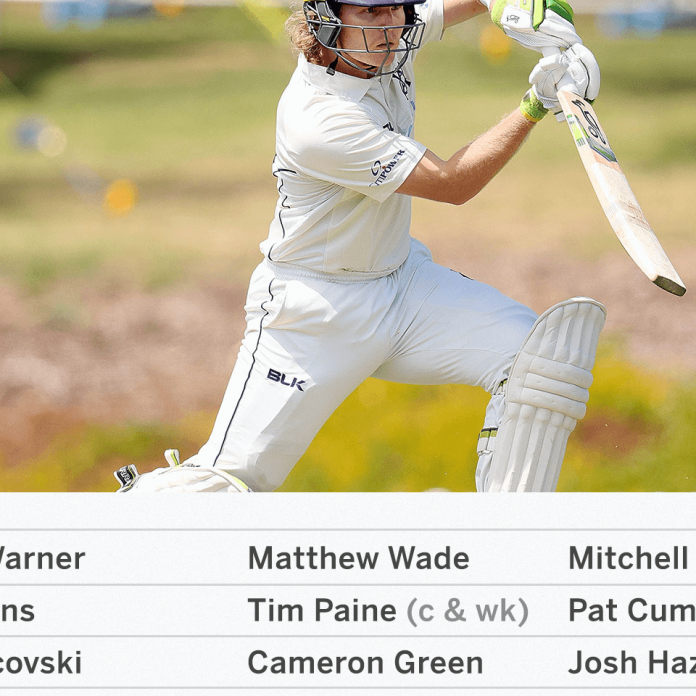 Will Pukowski and Cameron Green have been named in Australia’s squad for the Tests against India alongside leg-spinner Mitchell Sweepson and pace bowling all-rounders Michael Nazer and Sean Abbott.

Joe Burns, who has struggled with 57 runs in five innings in Queensland’s three Sheffield Shield matches, retains his place in the extended squad that is needed to navigate the Covid-19 protocol but it remains to be seen whether he will continue his partnership with David Werner.

Burns and Pukowski have also been included in the A Australia squad for two warm-up matches in early December, taking shape to decide who will join on December 17 in Adelaide.

Five players were among the standout performers during Adelaide’s Sheffield Shield Hub, which concluded on Wednesday. The 22-year-old Pukowski scored a back-to-back century – the first to be achieved in the Shield since 1997-98 – including a career-best 255 notes, the first time he has made a batting debut in cricket.

All-rounder Green, who was included in Australia’s limited-overs squad, has returned to bowling cautiously following a setback in the last two weeks, scoring a career-best 197 at the start of the season.

National selector Trevor Hones said the test is a good sign that many good young players for Australian Australian cricket and Australia Australia are arguing for selection.

“Two of those many standing players, of course, were Cameron Green and Will Pukowski. His undisputed form demanded a choice and we are very happy to see what a great Test series this youngster will be against a very happy opponent in the team.

See also  Four new cases and multiple risks of exposure to the virus in Nova Scotia. COVID-19 in the Atlantic

“Cameron has already won the selection in the white-ball team and he continues to be a part of the Test team. He is a wonderful young talent who has a lot of potential to become an all-rounder of the material over time.

“Will’s record-breaking start to the summer has been exceptional. His ability to show such patience is something that puts him in a good position for Test cricket and he is in a rare company with two centuries to start this summer. We are looking forward to the international arena. Will develop further. “

Swapson, who was part of Australia’s previous Test squad for the SCG match against New Zealand in January, is the Shield’s leading bowler with 23 wickets at 21.17 in three matches. That included five consecutive wicket-takers against New South Wales and 10 of 171 career-best matches. On Wednesday he led Queensland to a victory over South Australia with three wickets in 11 balls.

If Nathan Lyon is injured during the series he will have to provide a back-up, if Australia want to play two spinners in the SCG he could be in controversy for the XI.

Nizar and Abbott, both not equipped at Test level, will give pace-bowling back-ups to four big players – Mitchell Starc, Josh Hazlewood, Pat Cummins and James Pattinson – although Abbott’s shield form has thrown his hat into the ring. Possible all-round option.

Nazar has been a regular member of the team for Australia for the last two years and was again very relevant for Queensland. He also scored a century in the first class (took 5 for 32 against Tasmania in the same game) and took 10 wickets for a total of 24.40 in three matches.

“Mitch Swapson is another one who has excelled and is in excellent form for Queensland,” Hons said. “That side gives Nathan Lyon another strong spin option and we think he deserves and deserves the opportunity.

“Sean Abbott has also been outstanding since the beginning of the summer and he is coming into his first Test squad as a very strong fast bowling option. In the last 12 months he has added in the latest batting form that he presents a complete package to the team.

The 12 players who played Test cricket against Pakistan and New Zealand last season were previously included with Hohans which shows that he does not expect big changes in the team.

Like the limited-overs set-up, Australia have accepted the responsibility as the only vice-captain, losing the tag of Tim Penn’s vice-captain, i.e. Travis Head, vice-captain, named Pat Peter Cummins.

“In terms of the white-ball, we’re back to the traditional leadership model of captain and vice-captain, now we have a compromise and in-form group of experienced players,” Hones said. “Travis is an important member of the senior leadership team and has been integral to the team’s recent success which now comes in the form of the best Test team in the world. He has been a great supporter of the team and a very experienced leader.”