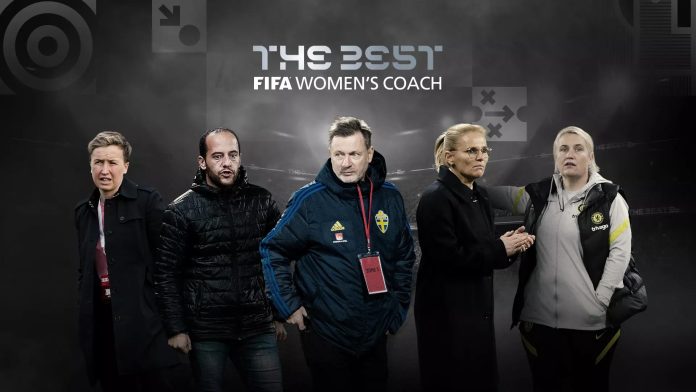 From Champions League winners to gold medalists. Who will replace Sarina Wigman this year? Or will she even be able to defend her title?

You can help decide by casting your vote for the trainer you think most deserves this coveted award on January 17th, 2022. To help you decide, let’s take a look at the candidates running for the Best – FIFA World Coach – Women award.

Last season, Luis Cortés celebrated his greatest success as a coach. With FC Barcelona she won a historic treble of the league, the Cup and – for the first time in the club’s history – the UEFA Women’s Champions League. Barcelona clearly beat Chelsea 4–0 in the final of the European Premier Class. In all, his team scored 208 goals in 47 competitive games. Thanks to her achievements, Cortés was named UEFA Women’s Coach of the Year 2020/21.

did you know?
entered at the end of june Luis Cortes resigns as Barcelona coach. In November 2021 it was announced that the 35-year-old Spaniard would be in charge of the Ukrainian women’s national team in the future. He made his official debut in a World Cup qualifier against Scotland on 26 November.

Peter Gerhardsson leads Sweden to the final of the Tokyo 2020 Women’s Olympic Football Tournament. On their way to the final against Canada, their team remained unbeaten and, among other things, defeated world champions USA 3–0 in the group stage. In the final, however, Sweden suffered their only defeat – and that on penalties.

did you know?
Between October 2020 and August 2021, Sweden’s coach Peter Gerhardsson has won 12 games, drawn two and lost just one.

What a year for Emma Hayes! She won the FA Women’s Super League with Chelsea for the fourth time, winning the Women’s League Cup and reaching the Champions League final for the first time with the Chelsea women’s team. For his achievements he was awarded the FA WSL Manager of the Year Award for 2020-21.

did you know?
Hayes became the first coach in 12 years to reach a Champions League final. Most recently, today’s German national coach, Martina Vos-Tecklenburg, who won the 2009 Cup with Duisburg.

The second English woman among the nominees, Beverly Priestman, gave Canada the biggest win in football history. She only succeeded Kenneth Heiner-Möller in October 2020. In his first year as head coach, the 35-year-old led Canada to an unbeaten Olympic victory in Tokyo.

did you know?
In 15 caps since February, Priestman has won seven, drawn six and lost just two, including a 12-game unbeaten streak for the women’s national team and Canada’s first win against world champions USA in 20 years.

Her name has been included in the nomination list of The Best-Fifa World Coach-Woman for the fifth time. Sarina Wigman has already received this award twice. Wigman, who coached the England women’s national team since September 2021, helped the Netherlands reach the quarter-finals of the women’s Olympic football tournament, where they were beaten on penalties by the United States.