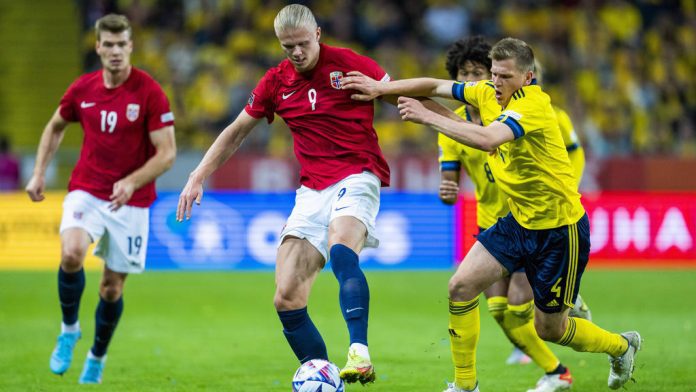 There’s a lot of excitement once again about former BVB star Erling Haaland. In the Norway national team’s 2–1 victory over Sweden in the Nations League, the striker was not only the match winner, but also part of a brawl that went below the belt.

For the second time in just four days, Erling Haaland shot the Norwegian national team to victory on Sunday. After his golden goal to make it 1–0 in Serbia, he also scored twice in a 2–1 win over arch-rivals Sweden.

After the final whistle, however, it was not his brace but the brawl with Sweden defender Alexander Milosevic that was the number one topic of conversation.

“At first they called me a ***. And I can definitely say that I am not,” Haaland said in an interview with the TV station “TV2”, describing the beginning of the argument with Milosevic.

“Then he said he was going to break my leg. A minute and a half later I scored. It was good,” Haaland smiled about his short personal duel with the Swedish central defender.

Milosevic accused Haaland of lying after the game and denied insults to Aftenbladet newspaper.

“I didn’t say that. What he says is very rude because I don’t speak Norwegian and he doesn’t speak Swedish, so I don’t even know how we should communicate,” said the defender, who turned down with the superstar. argument

However, Milosevic could not resist a small excavation at Haaland.