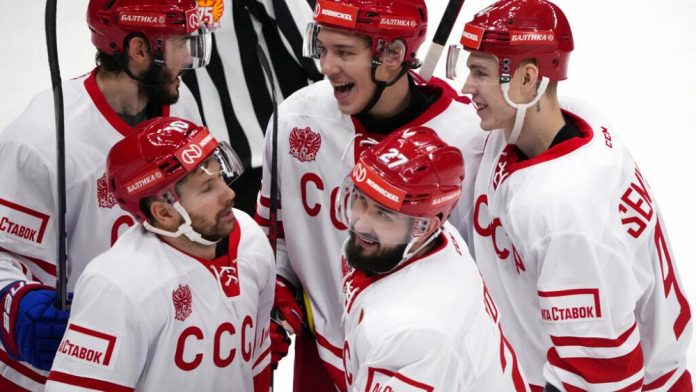 Nanu, what was going on in Moscow? In the recent Channel One Cup final against Finland, the Russian national ice hockey team surprised with a nostalgic outfit: CCCP was written on the red and white jersey, that is, USSR in Cyrillic letters.

A visual excursion into the past Soviet times and clearly not to everyone’s taste. Finnish sports representatives spoke of provocation.

Former Finnish Prime Minister Alexander Staub tweeted that the reference to the Soviet regime was “a derogatory gesture that has no place in sport or anywhere else”.

“We wanted to surprise our fans and the team with this. Players should feel the tradition started by our grandfather when he became Olympic champion in 1956 in this jersey.

The players have confirmed to us that they feel an even greater responsibility as this jersey is a symbol of Olympic victory.”

Ultimately, retro attire was not the deciding factor: Finland defeated Russia 3:2 and thus won the second leg of the Euro Hockey Tour, which is considered to be a preparation for the Ice Hockey World Championship.

The Russian Ice Hockey Federation is celebrating the 75th anniversary of the game in 2021. In December 1946, the first national championship game was held in the USSR.