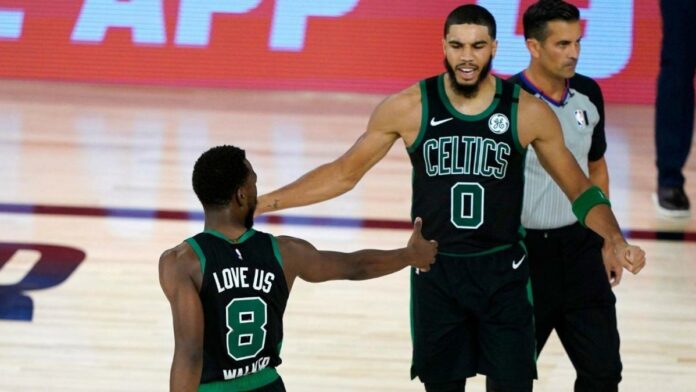 The first game of the first-round matchup between the No. 3 Boston Celtics and the No. 6 Philadelphia 76ers is in the books. Both teams were hoping to start their playoff push off with a victory, but ultimately it was the Celtics that walked away with a 109-101 win and took an early 1-0 lead in the best-of-seven series. Jayson Tatum led the way for the Celtics with 32 points and 13 rebounds, while Jaylen Brown added 29 points of his own. Joel Embiid paced the Sixers with 26 points and 16 rebounds.

These two teams are no strangers when it comes to meeting in the postseason. In fact, the Sixers and Celtics have met in the playoffs more times than any other two teams in NBA history. Most recently, the Celtics beat the Sixers in five games in the 2018 Eastern Conference semifinals. During the regular season, the Sixers beat the Celtics in three out of four meetings. However, they had All-Star forward Ben Simmons for all of those contests, and that isn’t the case in this series, as we saw tonight, so Brett Brown will need to figure out how to move forward now that Simmons is sidelined after knee surgery.

Below you can find four major takeaways from Boston’s Game 1 win over Philadelphia:

The 76ers didn’t have an answer for All-Star forward Jayson Tatum all night. Tatum set postseason career highs with 32 points and 13 rebounds, and in turn, he became the youngest player in Celtics history to compile a 30 and 10 stat line in a playoff game. Tatum was a +19 in the contest and he continued to come up with big bucket after big bucket for Boston. Tatum didn’t sink the Sixers on his own though, as he got a fair share of help from Jaylen Brown, who added 29 rebounds, six rebounds, and four assists. Together, Tatum and Brown became the first pair of Celtics teammates, both 23 or younger, to both score 25 or more points in the same playoff game. Not a bad night for Boston’s talented young forwards.

See also  Targeted by Gaultier, a gunner trained at PSG

This game was close throughout, and ultimately turnovers may have made the difference. While the Celtics did a solid job of taking care of the ball, the Sixers didn’t, and it cost them big time. The Sixers turned the ball over 18 times, and those 18 turnovers led directly to 21 points for Boston. The Celtics, on the other hand, turned the ball over only seven times, allowing the Sixers to score only seven total points off of turnovers. That 14-point differential in points off turnovers between the two teams is greater than the outcome of the contest. Moving forward, the Sixers will have to take much better care of the ball if they want to give themselves a chance in the series.

Embiid started Game 1 by hitting his first five field-goal attempts in the first quarter. It was a very promising start for Philadelphia. For the rest of the game though, Embiid attempted just 10 total shots, as the Sixers struggled to get him the ball in the post down the stretch of the contest. Simply put, as the Sixers’ best player, Embiid needs more looks — and more shot attempts — if the Sixers are going to have a chance in the series. The Celtics don’t have anyone that can match up with Embiid individually, and the Sixers need to exploit that fact as often as possible. The only silver lining here is that Embiid went 9-of -2 from the foul line; a testament to the fact that he was playing aggressively.

After the game, Embiid told media members that 15 shot attempts aren’t enough for him, and he said that he needs to be more assertive and demand the ball more moving forward.

4. Shake Milton was solid in his first postseason performance

We’ve all heard the trope that postseason NBA basketball is very different from regular season NBA basketball, and in many ways it is. Postseason play tends to be more physical, more intense and more intellectual than regular season ball. As such, it often takes young players a bit of time to get accustomed to the playoffs. Shake Milton handled his first playoff game pretty well, however, as in 26 minutes Milton had 13 points and three assists, while shooting 5-of-7 from the field, and 3-of-5 from long range. The numbers aren’t eye-popping, but they’re solid, and the Sixers will need more production like that from Milton moving forward.