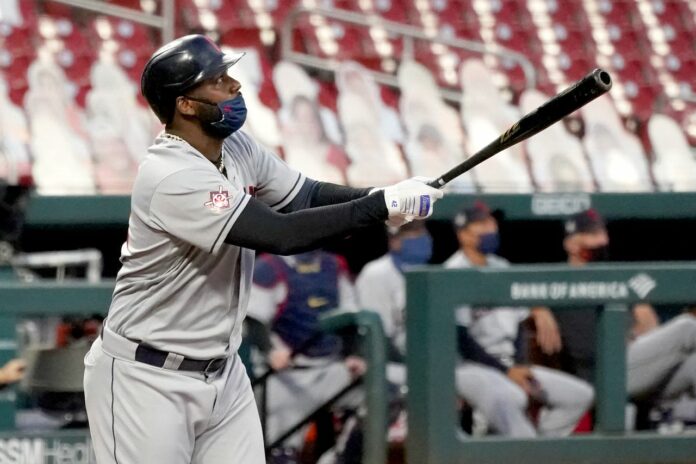 CLEVELAND, Ohio – Indians hitters feasted on St. Louis pitching Friday, setting season highs in both hits and runs in a 14-2 rout of the Cardinals at Busch Stadium.

The victory moved Cleveland into a three-way tie with the White Sox and idle Twins for first place atop the American League Central Division. All three teams have identical 20-12 records.

Reyes, who has hit six of his team-high seven home runs on the road, said this is the kind of game that can have a long-lasting impact on an offense.

“It gives an opportunity for all of my teammates to think on the positive side,” Reyes said. “Don’t lose your faith and keep working hard, the day is about to come. When you get those nights where you have two or three hits, the next day 100 percent you come with a better, positive mindset.”

When Tyler Naquin clubbed a two-run shot off the foul pole in right field in the fifth, it stretched Cleveland’s advantage to six runs. It was Naquin’s first home run in 2020. He is batting .298 with five doubles, a triple and eight RBI in 14 starts since joining the lineup after recovering from a toe fracture.

Santana, who matched a career-high with four runs scored, now has has 494 career extra-base hits with Cleveland, one short of tying Lou Boudreau for seventh on the franchise’s all-time list. Acting manager Sandy Alomar Jr. praised the veteran first baseman’s work afterward, saying other hitters can swing early in counts because Santana extends his at-bats and lets them see pitches.

“He can go out there and make a pitcher work and give the ability for the other hitters to ambush pitchers,” Alomar said. “He’s in the middle and he’s the glue of professional at-bats.”

Five Indians starters collected multiple hits including Reyes, Delino DeShields Jr. and Roberto Perez, who had three apiece. Reyes added a bases-loaded two-run single in the top of the sixth for a career-high five RBI. He finished a triple shy of a cycle and is batting .394 with three doubles and six home runs, 19 RBI and a 1.147 OPS in his last 19 starts.

Jose Ramirez and Francisco Lindor also continued trending in the right direction at the plate, each going 2-for-4 with a double and three runs. In the first inning, Lindor stole second ahead of a wild throw by Cardinals catcher Yadier Molina that allowed Ramirez to trot home from third for Cleveland’s first run. Santana followed with a walk before Reyes launched his 428-foot shot to right center field.

Things weren’t completely smooth on the bases for the Indians, though.

After back-to-back singles by Cesar Hernandez and Ramirez in the second, Lindor grounded into an extremely rare double play. First baseman Paul Goldschmidt threw home to Molina, who tagged Hernandez running toward the plate and then chased Ramirez back to second. When Lindor rounded first too aggressively, Molina faked a move toward him and threw to center fielder Dylan Carlson at second. Carlson applied the tag before Ramirez could dive back to the base while Lindor retreated to first.

According to Elias Sports, it was the first 3-2-8 double play in baseball’s expansion era (since 1961).

“That was a tough play,” Alomar said. “Jose should’ve just kept going there. He hesitated a little bit and it caused that out, but that happens.”

McKenzie allowed two runs on three hits before reaching his pitch limit in the fourth. The rookie struck out three and walked three, taking a no decision in just his second big league start. Alomar said the drawback of sitting through two long innings while his teammates batted early in the game might have affected the youngster.

“I don’t know if that threw him for a loop, but his command was not there like the first time,” Alomar said. “He was laboring through the innings.”

Cam Hill worked a scoreless fifth to pick up his first win, and Adam Plutko followed with four scoreless frames for his second career save.

Next: The series continues Saturday as the Indians send righty Carlos Carrasco (2-3, 4.50 ERA) to the mound against St. Louis right-hander Jack Flaherty (2-0, 1.98). First pitch is scheduled for 1:15 p.m. The game will be televised nationally on FOX while WTAM 1100 AM and WMMS 100.7 FM will broadcast the game locally.

New Indians face masks for sale: Here’s where you can buy Cleveland Indians-themed face coverings for coronavirus protection, including a single mask ($14.99) and a 3-pack ($24.99). All MLB proceeds donated to charity.

Can Triston McKenzie deliver an encore performance for the ages?

What does Mike Clevinger’s return mean for the rest of the rotation?

Greg Allen on protests: ‘I hope that we have the ability to effect change’

How can Indians help themselves at the MLB trade deadline? (podcast)