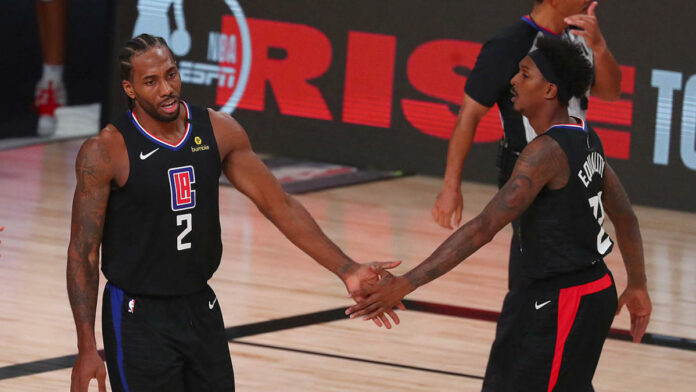 The Los Angeles Clippers are advancing to the second round of the NBA playoffs for the first time since 2015. After a more difficult matchup than they might have been expecting, they finally put away the Dallas Mavericks on Sunday, winning Game 6 111-97 to take the series, 4-2. They now await the winner of the Denver Nuggets vs. Utah Jazz series.

Marcus Morris led the way early for the Clippers, putting in nine early points, but was ejected in the first quarter for a Flagrant 2 foul on Luka Doncic. They didn’t really miss him the rest of the way, however, as Kawhi Leonard turned in another dominant playoff performance — 33 points, 14 rebounds and seven assists on 14 of 23 from the field. Paul George went for 15 points, nine rebounds and seven assists for a near triple-double.

Kristaps Porzingis was out again for the Mavericks due to his knee injury, so once again everything fell onto Luka Doncic’s shoulders. He certainly did his part, going for 38 points, nine rebounds and nine assists, but just didn’t get enough help. Dallas shot just 11 of 37 from downtown, and Tim Hardaway Jr. and Dorian Finney-Smith were the only other double-digit scorers.

Here are some key takeaways from Game 6:

Kawhi Leonard is arguably the best player in the league come playoff time, and he showed why on Sunday with yet another stellar performance. Finishing with 33 points, 14 rebounds and seven assists, while shooting 60.9 percent from the field, he turned in his fifth straight 30-point game in this series.

He spoke after the game about being able to get to his spots, and that’s exactly what happened. Whether it was getting into the paint at will to create for himself or his teammates, or clearing out one side of the floor to get in rhythm for a jumper, he was in full control the entire way.

His play in the fourth quarter was particularly important, as he stepped up when the Mavericks were getting back into the game. After Dallas cut the deficit to single digits early in the fourth, Leonard had a stretch where he went dunk, jumper, jumper, jumper in the span of a few minutes to push the lead back to double figures and shut the door on any comeback attempt.

This was exactly what the Clippers were hoping for when they added Leonard in the offseason, and exactly why they’re one of the favorites to win it all. When it really comes down to it, you’re going to want Leonard on your side.

Coming off his Rookie of the Year campaign, Luka Doncic asserted himself as one of the best players in the league this season, and his first trip to the playoffs did not disappoint. Though the Mavericks ultimately lost the series, everyone will remember this as Doncic’s official coming out party.

He went for 31 points, 9.8 rebounds and 8.7 assists per game over the course of the series, and his buzzer-beating 3-pointer to win Game 4 is one of the best playoff moments in years. The fact that he was doing all of it on a sprained ankle, and without Kristaps Porzingis for much of the series, only made it more special.

See also  their anniversary costumes are on display

Even the normally reserved Leonard was singing his praises after the game, calling him a “great player,” and saying Doncic did a “hell of a job out there.” Not that we needed to Leonard’s confirmation to know Doncic is special, but it was a reminder of how much respect he already has from the other stars in the league.

It’s too bad that this was the last we’ll see of Doncic for the playoffs, as he’s become one of the most entertaining players in the league, but it will be fascinating to see what he comes back with next season.

This was easily the most feisty first-round series. Right away in Game 1, Kristaps Porzingis was ejected during a confrontation where he was trying to stand up for Doncic, and the intensity never died down.

There was the incident between Montrezl Harrell and Doncic — which became a much bigger story than it needed to be — Marcus Morris stepped on Doncic’s injured ankle, either intentionally or accidentally, depending on your viewpoint, and Rick Carlisle was ejected from Game 5.

On Sunday, it didn’t take long for the fireworks to start again. Late in the first quarter, Doncic drove to the basket against Morris, and the veteran forward came down hard with an unnecessary swinging arm to Doncic’s head. The youngster immediately popped up and tried to go right at Morris, but was held back by Boban Marjanovic, who wrapped him up, and possibly saved him from an ejection himself.

Thankfully, cooler heads prevailed, both in that moment and over the rest of the game. While the series is done for now, this could grow into a little rivalry over the next few years, with both teams figuring to be power players in the Western Conference.