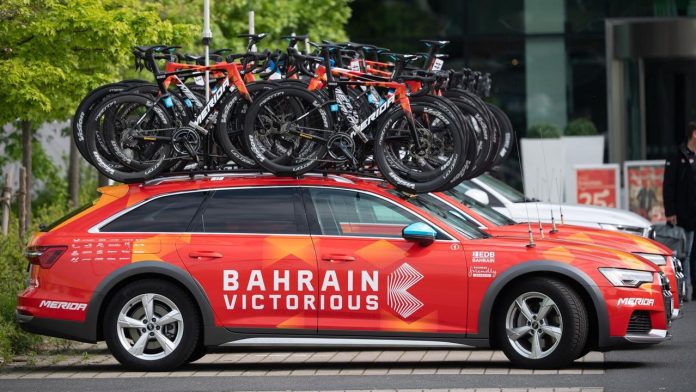 Another raid was carried out on the Bahrain-Victorious team a day before the start of the Tour de France in the Danish capital Copenhagen. Europol has now confirmed 14 discoveries in six countries.

As announced by the Copenhagen Police on Thursday (06/30/2022), this was done in response to a request from the French Police. ,We have no further information about the operationInvestigator Danny Rise said in the statement. The team said they were cooperating fully with authorities and that no items were confiscated.

Details emerged on Friday: European police authority Europol confirmed a doping investigation as part of the Tour de France. Between June 27 and 30, 14 searches were conducted in six countries, three people were questioned and a lot of evidence was seized, a statement said. Homes of drivers and team members were searched in Belgium, Spain, Croatia, Italy, Poland and Slovenia. The Public Prosecutor’s Office in Marseille was in charge. Although Europol did not name the Bahrain-Victorious team, the racing team itself confirmed the discoveries on both Monday and Thursday.

According to the newspaper “Le Parisien”, which refers to the Marseille Public Prosecutor’s Office, telephones, computers, storage media and medicines were confiscated. The apartments of Slovenian manager Milan Erzen, Polish team doctor Piotr Kosilski and French nurse Barnabe Moulin were searched. In addition, Italian professional Damiano Caruso admitted to “Cyclingnews” that his house in Sicily had been searched.

Already on Monday the homes of drivers and team members were searched across Europe. The team itself announced it, but left open where the search took place and which people were affected. Europol later said that the raids took place in three countries.

The hotel rooms from Bahrain to the Pyrenees during the last tour of France were-victorious Search was done. According to the drivers, the mobile has also been confiscated. An outcome of the investigation is apparently still pending. So far no official investigation has been initiated or any sanctions have been imposed against any of the drivers. Bahrainvictorious On the previous tour the team had won classification and three stages.