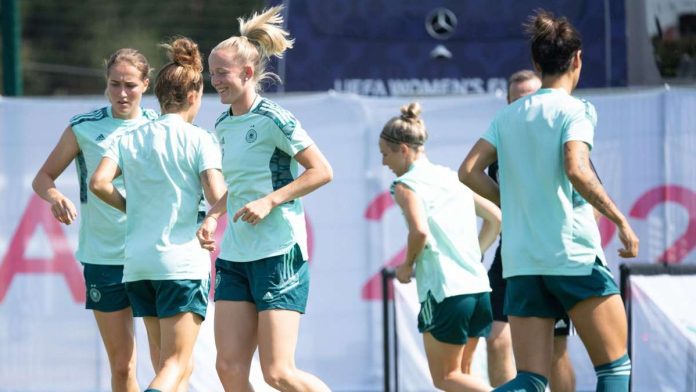 Recently injured Bayern midfielders Lena Magal and Sidney Lohmann have resumed team training. Carlsen said Maguel could return to the starting XI and Lohmann “is an important option for us”. According to him, Lena Oberndorf and Felicitas Rauch, who were suspended against Finland, will play again. She was represented against Finland by Lena Latwin (all Wolfsburg) and Sofia Kleinharne (Eintracht Frankfurt).

“I think it’s important to drink a lot. Mom always said that,” Roach said at the training ground. “Whether it’s 31 degrees or 38, it’s not that important anymore.”

England is also moaning from the heat. The temperature in Britain crossed 40 degrees for the first time since records began on Tuesday. However, the temperature for the quarter-final match between Germany and Austria in West London is expected to be just under 30 degrees Celsius.

The DFB delegation planned a boat trip over the Thames for Tuesday afternoon. “It’s voluntary. It’s also an air-conditioned boat. We don’t want to sit on deck for two hours,” Carlson insisted. “But some players need to get out. Not everyone was out yesterday because it was so hot.”