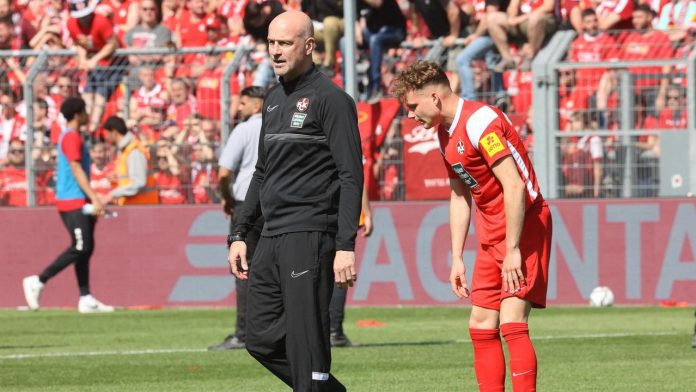 Marko Antwerpen is no longer the coach of 1. FC Kaiserslautern. The club announced this in a statement on Tuesday. It added that the decision of those responsible was made after “a thorough analysis of the current situation”. Assistant coach Frank Dopper is also leaving FCK.

“I am shocked and saddened by this decision,” Antwerp said of his release from “Sport 1”: “I wanted to be promoted with this club, gave everything for it, and now it’s a crazy decision.”

Betzenberg will have the new head coach Dirk Schuster, who will take over on Wednesday and lead the training. Schuster is said to be on the bench for relegation games against Dynamo Dresden (May 20 and 24). Sasha Franz joins him as an assistant coach.

According to SWR information, a member of the management floor took action after Antwerp was released on Tuesday evening. Fritz Fuchs, a member of the advisory board of Kaiserslautern Management GmbH and of the supervisory board of 1. FC Kaiserslautern EV, resigned from his office. He was reacting to the waiver measure because he did not agree with the manner of the procedure.

Marco Antwerpen took over the Red Devils in February 2021 and saved them from a fall in the regional league. In his first game as head coach, FCK defeated the Derby Waldhof Mannheim (February 6, 2021). Lautern ends season 14 this season He made the team into a top team after initial difficulties And Became a fan favorite as a cheerleader, Recently, however, he has come under criticism internally, Because the team lost straight promotion with a series of three consecutive defeats.

FCK 2 miss out on direct promotion to Bundesliga

FCK can only make the leap to the second Bundesliga through relegation against Dynamo Dresden. Most recently, the Red Devils lost 2-0 at Victoria Cologne. In an interview with SWR Sport, FCK sporting director Thomas Hengen demonstrated the team. There was criticism – especially since Eintracht Braunschweig had lost 2:3 at Meppen the day before. 8,000 fans traveled with him to Cologne. “The whole house, so many fans, unfortunately we disappointed today. It was okay, it was a disappointment, especially with the way we performed,” Hengen said.

Antwerp went out of hiding

On Tuesday morning, Antwerp told “Rheinpfalz” that he expected to remain a coach at FCK. Rumors had previously circulated that Miroslav Klose might follow Antwerp and had loose contact with the former FCK striker in late April. Antwerp consultant Stefan Bax criticized the club’s management on “Sport 1”: “If all this is true, it is amazing, to say the least, how you deal with a coach who has Not only did Lautern avoid relegation, which was supposed to be safe, but later also the most successful Third Division season in history. And this discussion just before the promotional games shows absolutely no professionalism,” Back said.