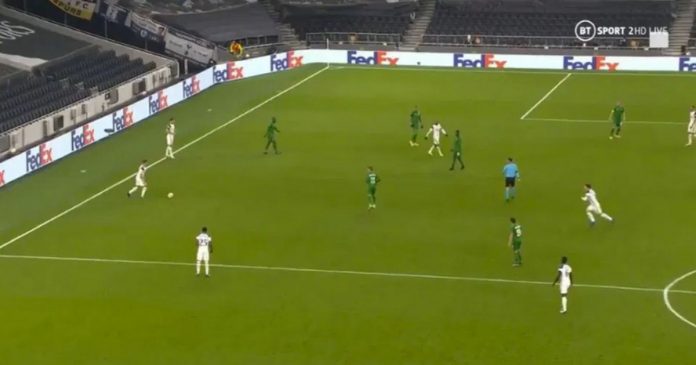 Harry Winks has admitted that his 53-yard scammer was in fact a pass seeking Tottenham team-mate Gareth Bale.

The North Londoners won their fifth game in a row as they watched Ludogorets 4-0.

Winks scored a third just after the hour mark with a diagonal strike that the visitors landed on the goalkeeper.

But the midfielder has come clean and has admitted that he was trying to find Welshman, but it doesn’t matter to take the goal instead.

He told BT Sport: “I’d like to sit here and say I did, but I have to be honest and say no. I saw Gaz (Gareth Bell) running. I’ll take him to the end of the day.

“It’s been a while (then I made the last one) but I’m happy with the way the team is playing.”

“It was really enjoyable. We started with the right intensity because we didn’t give them a chance to breathe. It was a good game for us.”

Winks has been tormented for torture in recent months whose picking orders have come down.

But, as he pushes for more minutes, he knows he needs to take a chance when they arrive.

“It’s difficult. It’s very difficult,” he added. “All I can do is play well when I get these kinds of opportunities.”

One chance that took its toll was striker Carlos Vinicius who scored the brace.

The Brazilian had a summer tide from Benfica and will spend the season in the capital for a loan.

His compatriot Lucas Maura then put Tottenham on track for the knockout stage in the 73rd minute.

Tangui Nodambel was the only man over the weekend to retain his place in his replacement team, but Jose Mourinho was more impressed by the frustrations.

He said: “I’m happy for them, some players did really well. It was Jeffet Tanganga’s first match after a long injury, the kids had a great chance to make history. 4-0 and three points, that’s good.

“I know the kids well. Harvey White works with us every day on our team, just like Jack Clarke, Dan Scarlett did pre-season with us.

“We know what they can do but it should be the right moment and today was the right push for them.”