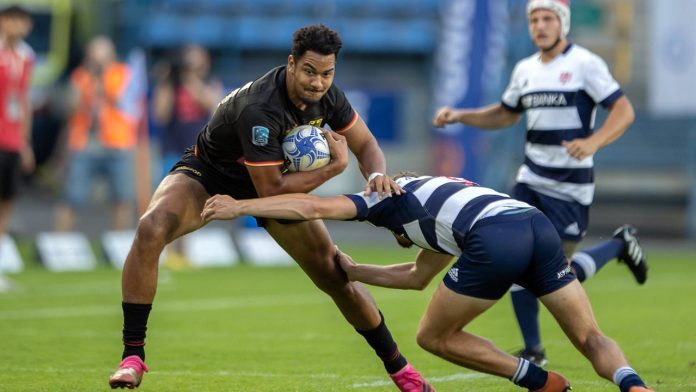 In early September, a German team will take part in the Rugby Sevens World Championship for the first time. Chris Umeh of Berlin will also be there. Its goals are at least as clearly outlined as its requirements profile.

RBB|24: Chris Umeh, with the German national team, you qualified for the Rugby Sevens World Cup in South Africa in early September. This is the first participation by a German team in a Rugby World Cup. What happened that it worked this time?

Chris Umeh: We had prepared well and we had a good new coach from South Africa in Philipp Snemann. His insight and his training have done us very well. We have a new game system, went into qualifying tournaments with a lot of confidence and then the team chemistry was perfect.

“No matter what your physical build, you have a place on the field”

Rugby club Berlin Bruisers probably has one of the most diverse sports teams in the capital. The newly formed team is FLINTA*: anyone who is not a cis male is welcome. So the club wants to work for diversity. by Luke WitteMore

The national team calls itself the “Wolfpack”.

We are like a pack, always together, no one stays in the middle. We used to have a game system where someone was chasing someone and then we all fell on them. It’s not so good now… but we still keep our name.

What type of rugby does the pack represent today?

A lot of discipline, a lot of dedication, a lot of heart. And communication is very important to us.

The amount of time you spend together should fit.

It’s a big advantage for us, that most of us are at the Olympic base in Heidelberg and we can train together almost every day. Other teams only meet a week or two before the tournament. We are a family on the square.

The World Championships will be held in Cape Town from 9 to 11 September. What are your goals for this family outing?

We want to show the world that Germany is ready for the big stage. I think we’ve made the jump to the top countries, to really badass teams like New Zealand, Ireland and Argentina. We want to show that we can persist. In front of 60,000 people.

The German national team in rugby 7s after qualifying for the World Cup for the first time.

Rugby is big in South Africa. Is this an added motivation for you to be in front of so many audiences?

Definitely! It’s like a dream come true. I have always wanted to play in front of so many enthusiasts who just love the game and are happy to see me play. this is incredible. Also, I think the more people watch, the better I play.

So what will South Africans see? Your height is 1.97 meters and weight is around 100 kg. You’re probably not a lively hook racket.

Many of my peers call me “Bum-Bum”. My signature move used to be: Join the guys who mess up. Usually it takes several people to deal with me, that is, to bring me down. And if I pass the ball at the right time, we have a majority. Then we can attack more, get more positions and score.

I am also a good defender. I feel like I’m relatively fast for my size and mass. But above all, I am a good ball carrier. This is my ideal work. On the outside, wait ’til I get the ball, full speed, power.

My ulcer and spoke had almost completely healed. But that was in my younger years. You didn’t think of anything, you just played.

The Big Dream of “Rugbyfest”

The second part of rugby league starts later this week. A Berlin union is also at the fore. The rugby club 03 from Weisensee is second in the table and has a clear goal of reaching the semi-finals for the German Championship.More

You’ve been doing this since you were eight years old. At that time you came to the Berlin Rugby Club as part of a school club. When did you know: I’ve wanted to do this for the rest of my life and as professionally as possible?

Eight o’clock. I had the ball in my hand and I ran. It was just there.

You are now 21, have lived in Heidelberg for two years and are training at the Olympic base there. How do you finance this life?

So far through game help. I will soon be a sports soldier.

To be able to play rugby full time?

I completed my technical college entrance qualification last year and will start studies in October. Psychology.

However, the World Championships in Cape Town are before you start your studies. Will there even be time to explore the city?

We are there for a week and have a day to see the city. There will be light training only for two-three days. Still you can probably go out with the boys in the evening and see a little bit of the city.

There are always orders for the entire week on our trips. Some carry the instruments, someone takes care of the music and someone has to give a presentation about the city and the country. We also have to encourage the intellect a little.

what is your role?

I was also allowed to give a presentation once. She was very funny. Otherwise, I’m really always the equipment carrier. The little ones usually have to be carried.

Thank you for the interview!

The interview was conducted by Ilja Behnish.