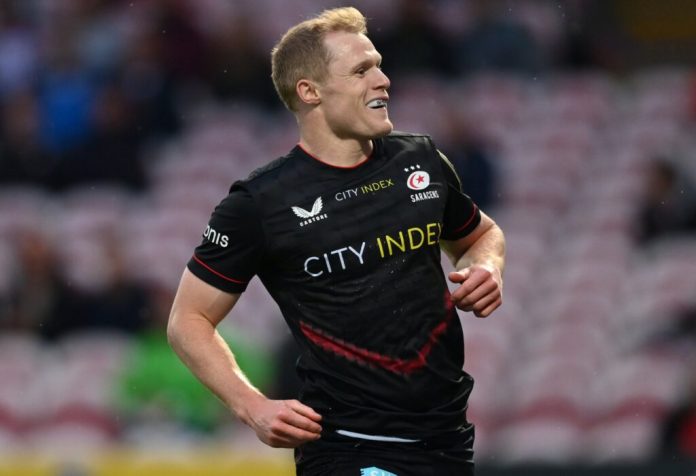 It says much about Welsh rugby that the 20-cap Welsh scrum-half, Aled Davies, is “stronger and more stable” at Saracens despite joining the English club amid the turmoil of his forced exile over a salary cap violation. Feels and it costs he got a chance to play for his country.

“There’s a team of international guys here,” Davis says. I, “And every workout has to keep you going and engaged and bring the intensity with you. I am happy inside myself. I regret nothing.”

The Professional Rugby Board of Wales said this week it had no plans to cut any of the four regions amid widespread concern over the poor performance of teams in the URC and Europe.

But anger over the proposed merger of Osprey and the Scarlets during the Six Nations Grand Slam in Wales in 2019, where Davies played four out of five games, was still fresh in his mind when he left Osprey for the Saracens the following year.

“It came when we were preparing for a Scottish game and were aiming for a Grand Slam – so the last thing the Welsh team needed was,” the 29-year-old recalled.

“I feel safer and more stable here, with the Saracens you know where you’re coming and going with the league. The players weren’t able to do the old bonding trip, but some post-game beers and bits did. Got me basically settled. There’s no ego, we just have fun off the field – and it’s all business when we step on the pitch.”

Davies’ first full Saracens season was in the league – although he says lightly that playing for Lanali at Cross Keys and Ebb Vale was proper preparation – and was followed by Ivan van Zyl of South Africa and Ruben de Haas of the USA during the scrum. Participated in full business. The halving took place after Richard Wigglesworth, Ben Spencer and Tom Whiteley departed for Leicester, Bath and Bristol respectively.

“The first part of Eld Scrum that we discovered was that it had all the capabilities we wanted,” says rugby director Mark McCall. “It was a very bold move on his part to effectively retire from international rugby.

“His passing and the pace between accidents is as good as anything I have seen. He’s an incredibly tough competitor, so defensive, he really connects. He also shoots the ball beautifully and we are lucky to have him.”

This season, back in the Premier League, the Saracens have dropped to second place. A headbutt between Davis and George Ford left the latter with a bruised head in a victory over the leaders of Leicester. “He stood up, wasn’t that so fair to him,” Davis says.

But as McCall noted, Davis would have to go into exile voluntarily. The 29-year-old from Bronnwid near Carmarthen had won 20 caps for Wales by the end of the 2019 World Cup – but takes 60 to be picked from outside the country.

Davies, who now lives in Harpenden, admits it has been “difficult” to watch Wales play and struggle over the past Six Nations, not least because the team has some good friends. In fact, Saracen’s former Liam Williams was instrumental in recommending his move.

With Davis also under contract at Saracens for next season, has he skipped the 2023 World Cup? “As a Welshman, I want to play for my country,” Davies says. “With the 60 cap rule, it looks like it’s off. I haven’t heard anything about a rule change. Until it changes, that’s it. I just focus on the Saracens and try to win trophies.” I do.”

Saracens captain and fly-half Owen Farrell has been sworn in three times in England-Wales games and once in Europe – now he and Davis are figuratively linked at the hip. “I think we played well together,” Davis says. “He’s just a good guy, full of knowledge and with standards he’s an incredible competitor every day. He keeps all the boys on their toes. But we have a lot of leaders on the team, not just Owen “

On Saturday, Saracens’ European Challenge Cup semi-final takes them to Toulon, where both the hosts and their guests have been triple Champions Cup winners over the past 10 seasons.

The French have lagged behind in the domestic league, but are still fielding big names, including winger Gabin Villier of France, scrum-half Baptiste Serin and flanker Charles Olivone, as well as South Africa’s Eben Etzebeth and Italian grandmaster Sergio Paris. Are included.

Davies, who has played twice for the Scarlets at Stade Felix Mayol, says: “I love the atmosphere there. In the locker room you can hear the noise building up, it sounds like a football game so I like it.

“That’s why I signed with Saracens to play in the big games and every week in front of big crowds of the Premier League. We want to win everything, this club does that. You’re as good as your last game and we’ve got to win the last game.” He was knocked out of the park in Gloucester in the quarter-finals of the week. But it’s a completely different challenge and we’re looking forward to it.”

See also  A Museum for Gardening