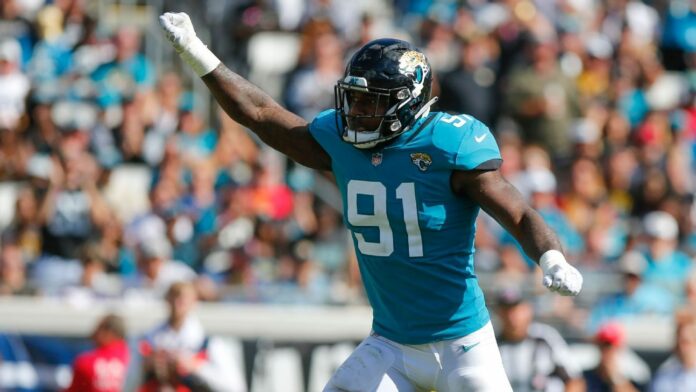 The Jacksonville Jaguars have agreed to trade franchise defensive end Yannick Ngakoue to the Minnesota Vikings for a 2021 second- and a conditional 2022 fifth-round pick that could go as high a third-round pick, league sources told ESPN’s Adam Schefter.

Ngakoue still has to sign his franchise tender, but the trade is in now place and Ngakoue is expected to join the Vikings.

Ngakoue, 25, and the Jaguars will have to coordinate when he is going to sign his tag Sunday so he can be traded to the Vikings. Because Ngakoue did not sign the tender before the July 15 deadline, he must play this season under the tag, valued at $17.8 million, before he can sign a long-term deal.

Sources said Ngakoue will restructure his one-year deal with the Vikings to create more cap space.

Ngakoue — whom the Jaguars drafted in the third round in 2016 — has been unhappy with the team since July 2019, when then-executive vice president of football operations Tom Coughlin abruptly broke off negotiations with Ngakoue’s camp. The Jaguars reportedly offered Ngakoue a deal that would pay him $19 million annually, but the pass-rusher turned it down and he played the 2019 season — after an 11-day training camp holdout — for $2.025 million, a considerable bargain for a player who had racked up 29.5 sacks in his first three seasons.

See also  Do you become a psychopathic murderer by reading a thriller in prison?

He suffered an early hamstring injury that limited his production but still finished with eight sacks in 2019 and ranks second in Jaguars history with 37.5 after only four seasons. In addition, his 14 forced fumbles are more than all but three players from 2016 to 2019: Chandler Jones (17), Khalil Mack (17) and T.J. Watt (15).

Ngakoue also was directly responsible for five of the 12 defensive touchdowns the Jaguars have scored since 2016: a pick-six, a fumble return and three forced fumbles on sacks that other players recovered for TDs. Another forced fumble resulted in a touchdown in the 2017 playoffs.

He had been vocal about his dissatisfaction with the Jaguars, especially on social media, and his desire to play elsewhere. He announced in March via Twitter that he told the team he wasn’t going to sign a long-term deal and in April went on a Twitter tirade against Tony Khan, the son of owner Shad Khan and the team’s senior vice president of football administration and technology.

The Jaguars are loaded for the 2021 draft in which many expect Clemson quarterback Trevor Lawrence to be the No. 1 pick. The Jaguars are now scheduled to have eight picks in the first five rounds — two first-round picks, a second, a third, two fourths and two fifths — with the chance that one of those fifths could go higher.