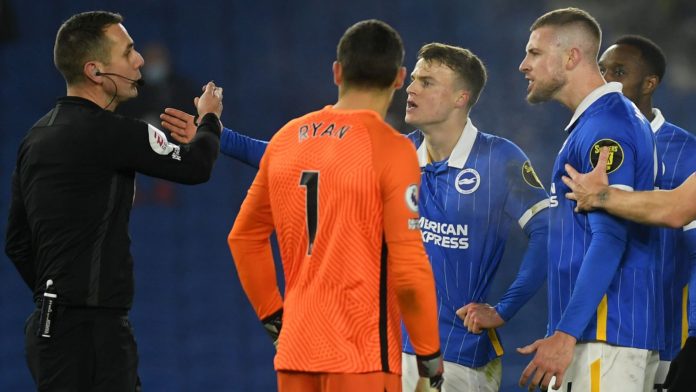 Jamie Keragher has insisted Southampton should not be penalized for the controversial end against Brighton, but Ralph Hassenhuttal believes it was the right decision.

Although the initial pressure appears to be outside the box, Sally March was judged by the VAR for fouling Kyle Walker-Peters inside the field, for which field non-field referee David Cote gave a free kick.

However, it was only after the leg was tangled that the pair arrived inside the box, sending Wal-Peters, and Peter Banks, an official, believed that Southampton was enough to pay the fine. Danny Angs converted from the spot to seal the win 2-1.

That proved to be BRAR’s second controversial decision, in which Carregher strongly argued that it should not be granted.

He said Monday Night Football .l: “It’s a foul, no doubt it was a foul, it’s just two fouls or one.

“There’s a little push back and you see when the referee gives when he’s out of the box – you can see that box out of the box. It’s next and I don’t know how you can tell if it’s vague. That March is putting his foot around him? Is that Waker-Peters kicking him in the back of the foot?

“Don’t give VAR [the push outside the area] As a penalty, they are not. You couldn’t do that. Initial contact, it is clear that the foot is outside the b x. The reason they have given is for this [as the players go inside the area]. I think it’s too harsh and I don’t think it’s fine.

“In the 77th minute of Brighton v Southampton, referee David Cote gave a free-kick just outside the penalty area for a foul on Kyle and Walker-Peters by Soli March.

“The VARA investigated the incident and advised the referee that the foul that was given occurred within the area and the decision should be commuted to a fine.

“The referee review area was not used by the referee because this was a factual decision.”

“This referee doesn’t have to go and look at the monitor, it’s factual, a little bit like a side fuss. Is he in the box, is he outside the box? It doesn’t happen now whether he’s inside or outside – he’s clearly wrong at the beginning and the next. Is inside .x.

“So the question is whether it’s wrong and from the VAR’s point of view, they should tell the referee to go and see. As I said before, going to the monitor is a waste of time because no one changes their decision.

“I said last week that I feel from time to time, the VAR was brought in to help the officers and we all wanted him to come to the rescue – the game goes a million miles an hour so how can they see things?” Looks like the VAR was exposed when some officers had a second chance to look at things and they still falsified things. For me, that’s another issue where I don’t think it’s fine. “

LUZENBURG: I can’t see why they gave the penalty

He said: “I agree it’s a free kick outside the box but secondary contact … for me, it [Walker-Peters] Kick in [March’s] The legs are not the other way around it. They are both falling, Wal Wal comes to Peters’ feet and marches behind his knees.

“That’s why I’m surprised. We’ve seen it 15 times, and still not really sure. My second part is not a penalty for me, I can’t see why they fined me. I think it’s pretty clear that That shouldn’t be a penalty.

“I do not think it is appropriate to discuss these matters with the VAR [Coote] Decided to start for a free kick out of the box outside, I have no problem with that, but then with a little bit of VR tax-Peters hitting this little thing behind the knee, waiting two minutes for VAR to make this decision – now I have a problem with that.

“As a football fan, I think it gets boring. When this takes a long time, you can always find something but not a single player complains about it in real time. Walker-Peters also runs the ball to suppress. That’s when I am. I think we’ve done something wrong. “

He said: “I think the penalty was inside. It was a little bit inside the line so it became clear that the contact was inside the box and it was fine. That’s why we have VAR.

“The longer this decision takes, the more I’m convinced it’s a penalty. It’s the right decision. It’s hard to watch for the referee, but it’s easier for the VAR.”

Potter: You have to accept one of them

Soon after the game Brighton manager Graham Potter was in a more accepting mood, but was unhappy with the overall result.

He said Sky Sports: “I haven’t looked back. It looks like the first challenge is outside and I don’t know if there was a second challenge. The referee thought so and that’s the way it is.

“I think it’s just what they’re talking about, in fact the crime is supposed to be inside and it proves it’s the case, so I think we’re using it. Assume it’s you. It has to be accepted.

“From our point of view, we’re a little disappointed with our second half performance overall. Having said that, I thought it was a pretty good game. There was nothing more, Southampton had some chances and so we also did ‘disappointed with the result.’