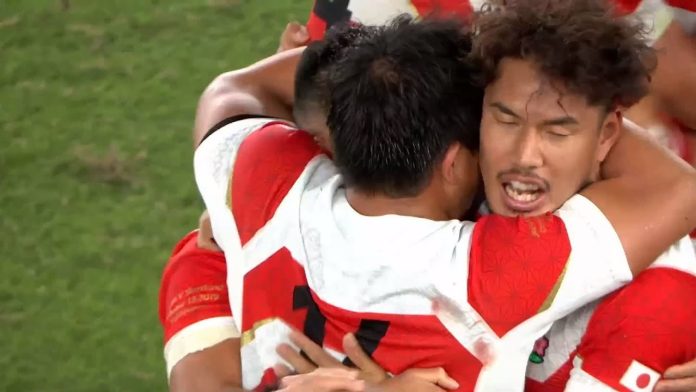 On Sunday, Japan played the final round of the Rugby World Cup 2019. Their rival Scotland was not an easy opponent as they were looking to make it to the quarter-finals as well. In a truly nerve-wracking match, Brave Flowers finally won the match and got ready for a historic event.

Japan and Scotland face off at Yokohama Stadium on Sunday night. Before the game began, the stadium was in complete silence as a minute’s silence was observed in memory of the victims of the storm that struck Japan the day before. After that it started with a lot of energy and Japan almost managed to get the first point in the first few minutes.

Scotland is under tremendous pressure

Instead, Scotsman Finn Russell managed to try with a successful lead from Greg Laidlaw in the sixth minute. However, Japan leveled in the 17th minute with the help of Kotaro Matsushima and Yu Tamura. He then took the lead once again from Keita Inagaki’s attempt and Tamura in the 25th minute. Just before halftime, they managed to score another seven points with Kenki Fukuoka and Tamura.

The second half started at 21:7 and should not be easy. Scotland believed in victory. Fukuoka tried again in the 42nd minute and Tamura scored. But then Scotland really turned up the heat and took seven more points in the 49th minute thanks to WP Nell and Greg Laidlaw. Soon after, with a lot of force, he managed the third try and the third rise.

This put Japan under a lot of pressure as the Scots kept getting closer to the goal line. However, with a lot of strength, Japan actually managed to face the Scots till the end and gave them no more points.

After the game, head coach Jamie Joseph spoke with the families of those killed in the storm about his thoughts. Plus, he was very proud of the team that had been training for success for so long. He acknowledged that Scotland outperformed him at times, but said the Japanese were better on key points. Joseph said that in the last crucial minutes, the players did not want to give up and played for those who were helping them. This is a very special moment for the team and for Japan.

Finalists for the Quarter Finals

The Scotland captain, on the other hand, praised Japan for its incredibly quick play and possession of the ball in the first half. He worked really hard in the second period, but it was difficult to score so many points. Unfortunately, Scotland now have to go home and Japan will face South Africa next weekend, whom they once again beat in 2015 with a sensational victory.

Due to the typhoon, the Rugby Association had to cancel Saturday’s games against Italy and France against New Zealand. The teams are, through to New Zealand, England and France. On the same day, however, the game took place between Ireland and Samoa, which ended 47:5. Samoa were already out on points already. On Friday, Australia also played against Georgia and won 27:8. They finished equal in the quarter-finals.