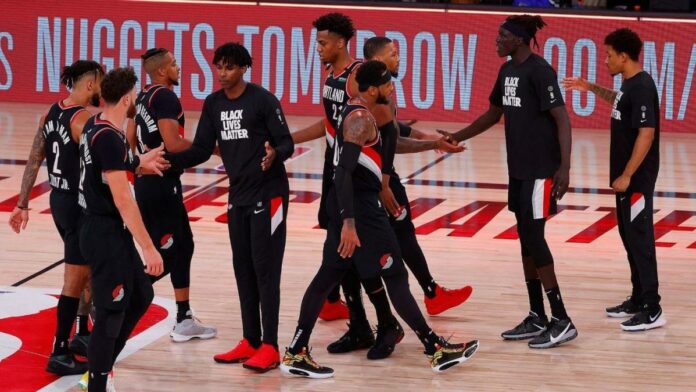 The first day of the NBA playoffs was chalk. The second? Yeah, not so much. The No. 1 seeded Milwaukee Bucks started the day by losing to the Orlando Magic, and the No. 1 seeded Los Angeles Lakers ended the day by losing to the No. 8 seeded Portland Trail Blazers. It is the first time since 2003 in which both No. 1 seeds lost their openers, and in the Lakers’ case, it came down to a lack of depth. LeBron James scored 23 points, pulled in 17 rebounds and dished out 15 assists while Anthony Davis poured in 28 points of his own, but the Lakers role players shot 4-of-22 from 3-point range. They simply can’t score enough to win when that happens.

Portland’s role players weren’t great either, but Damian Lillard’s 34 points were enough to lead them to a victory. Now the Blazers will need to only win three games out of six to stun the Western Conference’s No. 1 seed. The Lakers will have to go back to the drawing board if they want to avoid such a humiliation. What happened tonight was completely and utterly unacceptable.

1. It’s time to fix the rotation

This isn’t rocket science. The Lakers are starting every game down several points because they’re starting the wrong lineup. They’re exacerbating the problem by sending that same lineup out there at the start of the third quarter. The version of the starting lineup that included Avery Bradley outscored opponents by 12.6 points per 100 possessions during the regular season. The version with Kentavious Caldwell-Pope was outscored by 1.2 points per 100 possessions. The McGee-Caldwell-Pope-James-Davis-Danny Green fivesome doesn’t work.

At a minimum, McGee needs to be excised from the rotation entirely. Whether that means playing Markieff Morris at center more or hoping Dwight Howard can avoid foul trouble is another matter, but there just isn’t any evidence to suggest that JaVale can contribute to winning in the postseason. There’s a reason he was a benchwarmer for the Warriors. The Caldwell-Pope situation is more complicated. They need to play him, and his numbers, on balance, have been better as a starter. But tinkering with the combinations is critical. Alex Caruso deserves a look as the fifth starter. Kyle Kuzma’s place in the first five should be obvious.

This isn’t March anymore. These games count. Frank Vogel can’t afford to fritter them away by playing the wrong players. The Lakers are better than the Blazers. That much should be obvious. They just have to use the right lineups to prove it.

2. LeBron was great… but in the wrong ways

It’s hard to argue with 23 points, 17 rebounds and 15 assists. Those numbers don’t even tell the entire story. LeBron was great on defense as well. Nearly every decision he made, in a vacuum, was the right one.

But the Lakers scored 93 points against a defense that has allowed an average of 123 points over its past six outings. Yes, shooting was the primary reason for that, and the Lakers will probably hit more than five of their 32 long balls in Game 2. But role players have bad shooting nights. It happens. When it does, superstars are supposed to pick up the scoring burden themselves.

For all of the great things LeBron did in Game 1, he didn’t do what we’ve seen him do in the playoffs time and time again: score. Despite drawing incredible matchups in Carmelo Anthony and Gary Trent Jr., James was determined to play total team basketball. What the Lakers need is something closer to the LeBron of 2018.

In Game 1 of that postseason run against the Indiana Pacers, James scored 24 points en route to a triple-double… but the Cavaliers lost. He came out and scored 46 in Game 2, a win, and wound up averaging 34.6 points per game through the rest of the Eastern Conference playoffs. If no other Laker is going to create shots, LeBron is going to have to do something like that for the Lakers to win the title. It’s cliche, but he has to be more like Michael Jordan and less like Magic Johnson. His roster demands it.

3. The Blazers got away with playing two centers

It might have happened by accident. Wenyen Gabriel started at power forward for the Blazers but got into early foul trouble. So the Blazers did something that few 2020 teams would ever consider: they played their two centers together. It was a look they experimented with a bit prior to the playoffs, but without much success. That was for good reason. Neither Hassan Whiteside nor Jusuf Nurkic are particularly strong shooters, nor can they defend the perimeter all that well.

But they survived those minutes in Game 1 by crashing the boards and protecting the rim. The Lakers missed the open shots the Blazers created with their two-big lineups, and while it may not be sustainable, Portland might not have much of a choice but to go back to those groups until Zach Collins is healthy enough to return. This is a thin team. Their lineup options are limited. The entire enterprise falls apart if the Lakers start making shots, but until they do? The Blazers might have found a way to shift some minutes away from the worst players on their bench and towards better ones.