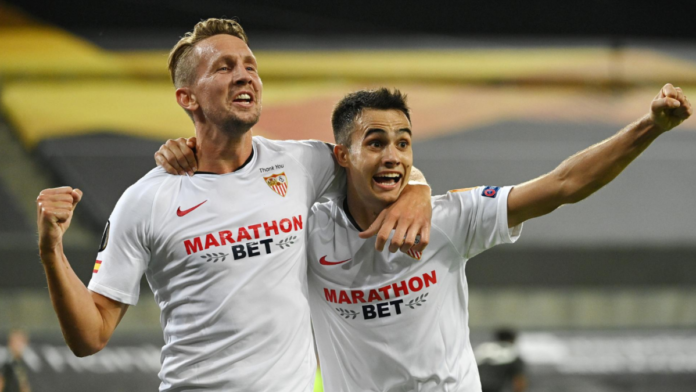 Sevilla will compete for the 2020 Europa League title after eliminating Manchester United, 2-1, in Sunday’s semifinal.

Both teams provided an uptempo first half, playing open and getting opportunities on goal in the final third. It was nearly a nightmare start for Sevilla as they conceded an early penalty in the 9th minute with United’s Bruno Fernandes converting. The Spanish side would respond in the 26th minute with an equalizer from Suso. Luuk de Jong would provide Sevilla with the game-winner in the 78th minute after subbing on in the second half.

Sevilla FC: Gunning for the title of Kings of Europa League, the Spanish squad came into this match as the underdog despite a record run of advancing out of Europa League semifinals. The team appeared to concede a bit of the possession in the first half and it cost them as they gave away an early penalty kick. But Sevilla scored an impressive equalizer after a switch in the point of attack thanks to a good finish from Suno. The game-winner would come from a second half sub in De Jong.

But it was an organized defensive performance that should also be praised in this performance. They faced 20 shots, seven on target, with Manchester’s only goal of the game coming on the penalty kick conversion.

Manchester United: Despite getting on the scoreboard early, United were unable to overcome their questionable shot selection and lack of finishing. The English side was able to find time and space in Sevilla’s end, but entered halftime level at 1-1. United went into the second half pressing high and attacking often, but could not break Sevilla’s line which was anchored by Yassine Bounou’s goalkeeping.

It would ultimately be a defensive breakdown by United that gave way to Sevilla’s game winner, leaving freshly subbed on De Jong unmarked in the box. The team drops another semifinal this year, and is looking for answers after a disappointing season.

Bono, Sevilla keeper: Could do nothing on the penalty kick but had some absolutely amazing saves in the second half. Rating: 8

Suso, Sevilla forward: Really good strike in the first half to make it 1-1. Didn’t have much to do after that, but he did his job. Rating: 7

Bruno Fernandes, United mid: Took his penalty kick like a star, as usual. Even contributed a bit defensively. Rating: 7

EM in England: Schouler back on the pitch: DFB women defy the heat