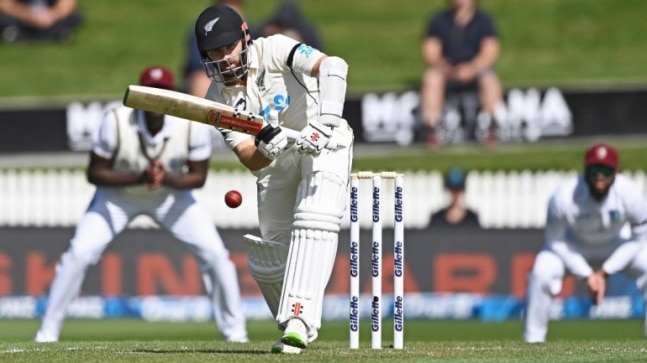 New Zealand skipper Kane Williamson led the way for the West Indies to bat in the first Test at Hamilton on Thursday and ended the unbeaten day at 97. It is just 3 runs short of his 22nd Test century.

Williamson and opener Tom Latham shared a 154-run second-wicket partnership that put New Zealand in a strong position on the stumps on Thursday.

At the end of the day’s play, the Black Caps had a score of 243/2 with Williamson and Ross Taylor batting at the crease in 97 97 and on1, respectively.

The first session of the day was washed out due to continuous rain and the game started after the scheduled afternoon time. Only 78 overs were bowled in the rain-affected day.

West Indies started the day well, the new ball was swinging and Shannon Gabriel was the bowler of choice for the visitors. He put Will Young, who made his swing debut, in trouble and eventually pinned him against the stumps in the 4th over of the match. But that proved to be the only progress for the tourists in the next overs0 overs.

Williamson and Lath led the ship with a 154-run partnership until Kemar Roach cleared the opener in the 56th over of the match by scoring 86 runs from the club.