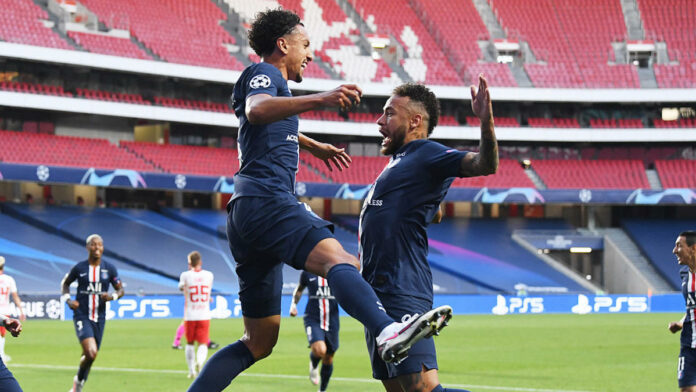 Goals were scored from unconventional places with Marquinhos, Angel Di Maria and Juan Bernat getting on the scoresheet, while Neymar and Kylian Mbappe remaining noticeably absent. That doesn’t mean they weren’t involved, of course, as their presence alone allowed their teammates to get free while attacking and putting the ball behind net. Neymar was awarded an assist on the second goal of the match with a beautiful no-look heel chip that miraculously found Di Maria.

More notable than the goals of the game themselves is what this moment means to this French side. For years, PSG have been a club categorized (perhaps correctly) by their inability to succeed in European competitions rather than their on-field talents. Now, they have a chance to be the heroic version of this team that breaks that string of failure, and recategorizes this team to be one that can be dominant in Europe.

Here’s what to know and see from the 90 minutes:

Neymar’s magical flick to Di Maria doubles PSG lead
The magic of Neymar’s technical abilities cannot be overstated, particularly when he was possession of the ball. But that ability and technical wizardry also makes its way into his passing, which is what helped lead to the second goal of the game for the Parisians. A beautiful cross into the box from Paredes finds the back heel of Neymar, who’s able to somehow flip the ball perfectly to his teammate, who hammers the second goal of the match home.

Di Maria’s gorgeous cross gets PSG on the scoresheet
Neymar isn’t the only Parisian player with incredible passing abilities. Di Maria, the recipient of the aforementioned highlight pass, also got in on the action earlier in the game with his cross that gave Marquinhos — a hero of PSG’s quarterfinal win over Atalanta — a chance to head home the first goal of the game for PSG.

Neymar nearly scores golaso from deep
PSG’s third goal was more about the mistakes that Leipzig made than the moves that the French side made correctly, so the third highlight is this absolutely bonkers attempt at goal that only a star like Neymar can take. The free kick opportunity was far and at a bad angle, but that didn’t stop the Brazilian from firing a curling low shot from the spot that was mere inches away from being one of the goals of the competition.

Let’s rate some of the notable performances on the day, with one being the worst and 10 being perfection:

Angel Di Maria, PSG
Absolutely lovely assist on the opening goal and got his goal just before half time. After serving a suspension against Atalanta, he took advantage and was the hero. Rating: 9

Peter Gulacsi, RB Leipzig
Horrific error led to the second goal for PSG. Really put his team in a tough spot, and that was the nail in the coffin. Rating: 4

Paris Saint-Germain now await their fate in the Champions League final, where they will face the winner of the other French-German semifinal between Bayern Munich and Lyon. That match takes place on Wednesday at 3 p.m., with the final taking place on Sunday.

You can stream every match on CBS All Access. Sign up now and enjoy one month of CBS All Access for free ahead of the opening match. If you’re a CBS All Access subscriber looking for a match that’s live right now, go directly to the UEFA Champions League page. Every match will be available on demand shortly after the final whistle. We will be with you the entire way providing updates, analysis and highlights below.

CBS was with you the entire way providing updates, analysis and highlights below.