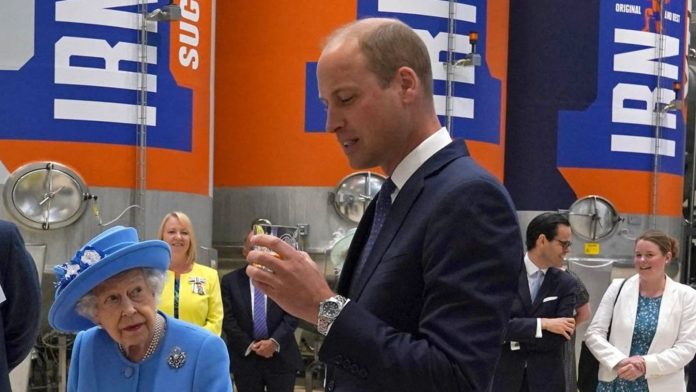 The Queen has begun her tour of Scotland. With Prince William, she visited a soft drink manufacturer.

Queen Elizabeth II (95) officially began her visit to Scotland on 28 June. Accompanied by his grandson Prince William (39), also known as the Earl of Strathearn in Scotland, he visited, among other things, the factory of a soft drink maker at Cumbernauld, near Glasgow. There, the British monarch, dressed in blue with a cap, pearl necklace and white gloves, inaugurated a new manufacturing facility and Prince William allowed to taste the drink,

The caffeinated soft drink Iron Brew is considered the national drink of Scotland along with whiskey in some places. “You can taste the steel girders,” remarked the Duke of Cambridge According to the British “Daily Mail” After the first sip, referring to the advertising slogan “Made in Scotland from steel girders”. The makers did not disclose the drink’s exact ingredients to the royals. Apparently only three people know him.

The Queen will be in the country for four days to celebrate Holyrood Week, also known as Royal Week in Scotland. Meanwhile, she lives at Holyrood Palace, the official residence of the British Queen in Scotland. Traditionally, the Queen will pay tribute to the culture and society of Scotland during her appearance. His daughter Princess Anne will also perform with him on Wednesday and Thursday.